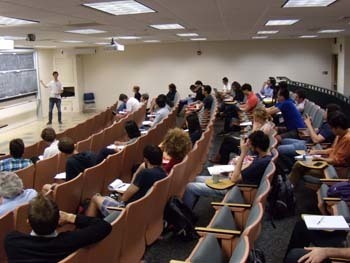 For the fifth consecutive year, the Center for Mathematics at the University of Notre Dame is hosting its summer thematic programming. This year’s three-week program, hosted May 26-June 5, focuses on boundaries and dynamics.

During the second week of the program (May 26-29), 46 graduate students and postdoctoral researchers attended four days of mini-courses. Participants came from across the globe, representing the countries of France, Israel, United Kingdom, Finland, South Korea, Brazil, Senegal, China, Luxembourg, Canada, and the United States.

Speakers for the mini courses included, Bertrand Deroin of École Normale Supérieure in Paris, Alex Furman of University of Illinois—Chicago, Sébastien Gouëzel of Université de Rennes 1 in France, and Joseph Maher of College of Staten Island—CUNY. 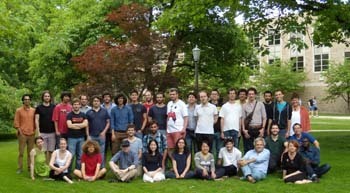 “I wanted to attend this year’s program to meet other mathematicians in my field and discuss my research,” said Adrien Boyer, a graduate student from the Israel Institute of Technology. “My work is in the same field as the conference theme. I’ve realized while attending this program that it might be possible to extend some of my work in a more general context.”

Planning for the 2016 thematic program in process and is tentatively titled, “Generalized Stability, Pseudo-finite Combinatorics, and Related Topics.”