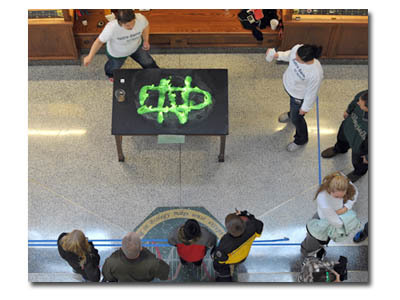 Graduate, undergraduate students and professional specialist faculty in the Department of Chemistry and Biochemistry provided vivid demonstrations and hands-on experiments on Saturday, October 24 in celebration of National Chemistry Week. The inaugural event, held in the Jordan Hall of Science Galleria, attracted a steady stream of visitors before the Notre Dame-Boston College football game. Exploding balloons, bright-colored flame tests, and green-burning boric acid drawings of shamrocks and the ND monogram acquainted people with an elementary understanding of science. 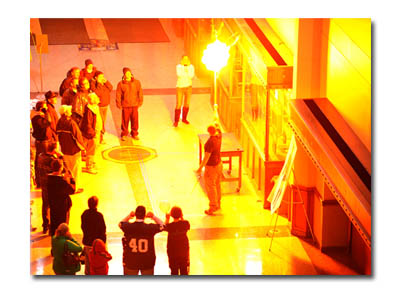 At the nonmetals exhibit, graduate students, including Jeff Bertke, a third-year graduate student, applied flame to balloons filled with hydrogen, helium and a mix of hydrogen and oxygen. Occasional booms filled the Galleria as the hydrogen-oxygen mix produced water and energy. Main Group Metals exhibitors sprayed solutions of metal ions into a flame. This classic experiment identified barium when the flame turned green, sodium with orange, strontium with red and potassium with purple. The table featured a silicon wafer borrowed from Chemistry professor Marya Lieberman and sound chips that would play the Notre Dame fight song.

At a station on transition metals, visitors learned why the Statue of Liberty is green – the original copper, exposed to nitric acid from acid rain, has coated the statue with a green film of copper nitrate. They also saw the effects of magnetism on iron filings, and in another section they saw the remains of copper-plated pennies made after 1983 with their zinc core dissolved by hydrochloric acid while older all-copper coins remained intact. At the station on inner transition metals, a Geiger counter demonstrated the radioactivity of common household items such as a radium clock dial, smoke detector and bright orange Fiestaware bowl. “This is chemistry, but this is fun,” Michelle Bertke said. “It’s more the ‘wow’ factor.”