Greg Crawford, dean of the College of Science, hosted the annual Dean’s Award Luncheon on Friday, May 17, 2013 in the Jordan Hall of Science Galleria.  Over 250 students, family members, faculty, and staff were in attendance to celebrate the achievements of the college’s top graduates from the Class of 2013. 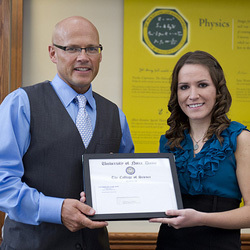 The Dean’s Award was established in 1980 and is presented to a graduating senior in recognition of exemplary personal character, leadership, service, and outstanding scholarship. This year, dean Crawford presented the award to three students, Michelle Lundholm, MurphyKate Montee, and Patrick O’Hayer.

Michelle Lundholm of Hoffman Estates, Ill. graduated with a double major in chemistry and mathematics, and was a member of the Glynn Family Honors Program. As an undergraduate, she worked with Olaf Weist conducting computational chemistry research. They worked closely with a large pharmaceutical company and researchers in Sweden and Lundholm will be a co-author on a second publication this year. She will attend the Feinberg School of Medicine at Northwestern University in the fall. 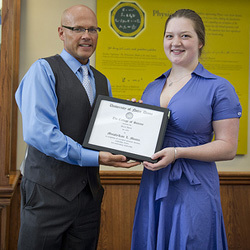 MurphyKate Montee of Sturgeon Bay, Wisc. graduated with a double major in mathematics and music, and was a member of the Glynn Family Honors Program.  Advised by Frank Connolly, the focus of her undergraduate research was on the geometry of curves and manifolds. Her research with the Williams College Research Experience for Undergraduates (REU) in Mathematics has resulted in two peer-reviewed, submitted publications.

Montee won the Alice T. Schafer Prize in Mathematics, which is awarded to one female undergraduate nationally each year.  She also earned a National Science Foundation Graduate Research Fellowship and was one of 14 students nationwide to earn a Churchill Scholarship. She will use the Churchill Scholarship to study at the University of Cambridge in the United Kingdom for her Master of Advanced Studies (Part III) in Theoretical Mathematics with a focus on geometry and topology.  When Montee returns from Cambridge, she will attend University of Chicago to earn her Ph.D. 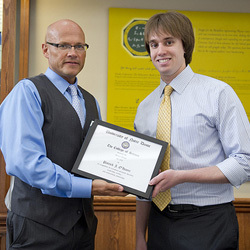 Patrick O’Hayer of South Bend, Ind. graduated with a major in biological sciences and was a member of the Glynn Family Honors Program. As an undergraduate, he worked in the laboratory of David Hyde studying retinal degeneration in zebrafish. He was an author on a paper recently published in the Journal of Neuroscience and will be a co-first author on a paper that will be submitted for publication soon.   Last year, O’Hayer was the recipient of a Goldwater Scholarship, a prestigious national award that recognizes outstanding undergraduate leaders in the sciences and engineering. He will be attending the University of Michigan in the fall to pursue a joint M.D. /Ph.D. program. 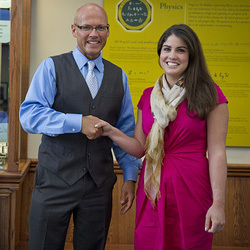 The Dean’s Research Award was established in 2012 and is presented in recognition of exceptional research within and across the traditional boundaries of scholarly disciplines to a graduating senior who embraces, facilitates, and fosters an environment of scientific inquiry. This year, four students were presented with the Dean’s Research Award, Brooke Conti, Lee Haruno, Kevin Kelly, and Kevin McDermott.

Brooke Conti of New Providence, N.J. graduated with a major in science-business and was a member of the Glynn Family Honors Program. She has extensive research experience in the lab of Zachary Schultz and off-campus. She attended the 2013 meeting of the American Association for Cancer research and currently has an abstract submission in progress.  She wants to continue cancer research and will be attend the Graduate School of Biomedical Sciences at Gerstner Sloan-Kettering Cancer Center in the fall. 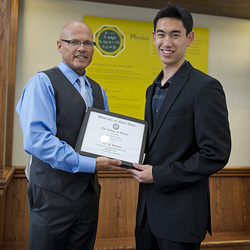 Lee Haruno of Mililani, Hawaii graduated with a major in science prepreprofessional studies.  He has taken advantage of extensive research and clinical experiences every summer since coming to Notre Dame. On campus, he worked with Kasturi Haldar and the Center for Rare and Neglected Diseases on Niemann-Pick Type C disease. Haruno will attend Baylor College of Medicine in the fall. 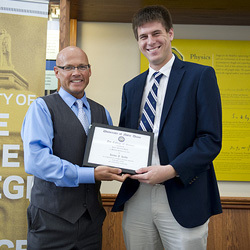 Kevin Kelly of Troy, Mich. graduated with a double major in mathematics and physics. As an undergraduate, he was very active in particle physics, working with Michael Hildreth. He was also elected as the 2012-13 drum major for the Notre Dame Marching Band. Next year he will begin pursuing a Ph.D. at Northwestern University where he will continue his research in particle physics. 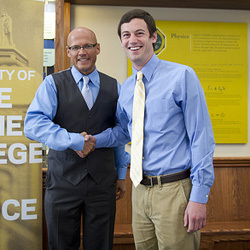 Kevin McDermott of Burr Ridge, Ill. graduated with a major in physics and was a member of the Glynn Family Honors Program. He began participating in undergraduate research during his sophomore year. He has worked on various projects regarding the Higgs boson analysis and his work will contribute to a publication this fall. Last summer he participated in the University of Michigan REU program at CERN in Geneva, Switzerland were he participated in the ALICE (A Large Ion Collider Experiment) project.  Next year he will attend Cornell University to pursue his Ph.D. and continue his research in high energy physics.

At the awards banquet, each of the College of Science departments recognize students for their outstanding scientific achievements throughout their college careers.

Department of Chemistry and Biochemistry

The George Kolettis Award in Mathematics

The General Electric Prize for Senior Honors in Mathematics Major

The Paul Chagnon Award in Physics