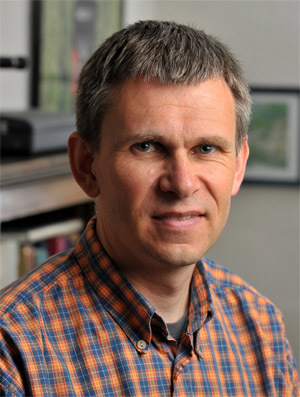 Morten Ring Eskildsen, associate professor of physics, has been awarded a new, 3-year DOE award of $519,013 for his project, "Metastable Vortex Lattices – Properties and Applications."

The collective nature of the correlated electron many-body system in the presence of magnetic fields and/or localized magnetic moments displays an astonishing variety of different phenomena. Among these one finds magnetic ordering, superconductivity, fractionally charged excitations, quantum criticality and non-Fermi liquid behavior to name just a few. One of the current grand challenges in solid state physics is to provide a microscopic understanding of superconductivity in systems where it coexists with local magnetic moments, relevant for high-Tc as well as heavy-fermion superconductors.

The current project involves small-angle neutron scattering studies of the vortex lattice (VL) in superconductors. The research is centered on the study of vortices and how the VL reflects the intrinsic nature of the superconducting state in the host materials, with a specific focus on two main topics. The first is studies of the VL in the two-band/two-gap superconductor MgB2 where an unprecedented degree of VL metastability was recently discovered, and which for the first time allow measurements of a well-ordered VL configurations besides the ground state. The second topic is studies of the VL in the heavy-fermion material UPt3 which in many ways is the paradigm of unconventional superconductivity. In this material VL metastability will allow measurements of the VL in otherwise experimentally inaccessible parts of the phase diagram. The measurements on UPt3 will be performed in collaboration with W. P. Halpering who is the John Evans Professor of Physics at Northwestern University.

Experimentally, the emphasis will be on vortex imaging by small-angle neutron scattering (SANS). Experiments will be performed at neutron facilities both in the US and abroad, including the NIST Center for Neutron Research, Oak Ridge National Laboratory, Paul Scherrer Institute in Switzerland and Institut Laue-Langevin in France.