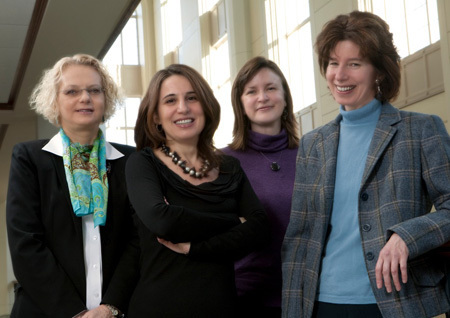 These collegiate chairs are a testament to each of the faculty member’s exceptional accomplishments in research, teaching and service. Their achievements and continued contributions to the University and our region are invaluable.

Besansky’s research focuses primarily on African vectors of human malaria: the anopheline mosquitoes known as Anopheles gambiae and Anopheles funestus. Clark studies protein folding mechanisms which are the cause of numerous human diseases including cystic fibrosis, Alzheimer's disease, juvenile cataracts, and many forms of cancer. Dobrowolska-Furdyna specializes in magnetospectroscopy of semiconductor heterostructures— systems composed of ultrathin layers of different semiconductor compounds, with thicknesses in the range of a few atomic monolayers. Polini studies commutative algebra and its interactions with algebraic geometry.

The collegiate chairs are supported by a grant to stimulate the recruitment and retention of intellectual capital here in Indiana.