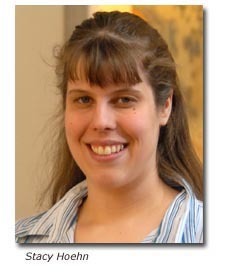 Stacy Hoehn, who will receive her Ph.D. in Mathematics this semester, has been awarded a National Science Foundation (NSF) Postdoctoral Fellowship to study at Vanderbilt University for two or three years. She will continue her research in topology, investigating mathematical objects, called high-dimensional manifolds, that do not have boundaries.

Hoehn became interested in topology at Xavier University, where she earned a B.S. in Mathematics and Computer Science in 2004. At Notre Dame, where she earned an M.S. in Mathematics in 2006, she was advised by Prof. Bruce Williams. Her research has included Siebenmann’s end theorem, surgery theory, algebraic K-theory and automorphisms of manifolds.

She received a three-year Graduate Research Fellowship from the NSF in 2005, which among other things supported a trip to Germany to give a presentation on microbundles at a workshop on high-dimensional manifolds and to attend a conference on surgery theory in Scotland. She met Bruce Hughes, who will be her mentor at Vanderbilt, at a conference a few years ago.