The fifth annual Graduate Research Symposium took place on Wednesday, February 27 in the Jordan Hall of Science Galleria. The symposium featured presentations from graduate students and postdoctoral researchers from across the University in science, engineering, social sciences, and humanities. Awards were given to the first and second place presentations in each category.

First place science winners, Geoffrey Siwo, Ian Sander, and Victoria Lam developed an online game called Fit2Cure. The group’s goal is to revolutionize the way drugs are designed computationally, by combining the ingenuity and spatial pattern recognition abilities of humans with the computing power of molecular docking software.  Players compete to discover potential new drugs by finding sites on proteins where the drugs can bind. On average, players are able to find the active site on a protein in less than one minute, with the fastest players finding it in 14 seconds.  The group is also developing computational methods that mine the probability density distributions of the game data to predict novel ligand binding sites. The Fit2Cure game can be applied in the repurposing of existing drugs, as well as the discovery of new drugs, their targets, and side effects.

See a brief demonstration from Fit2Cure: 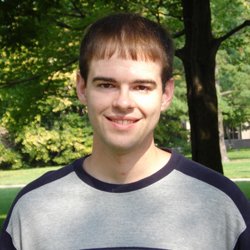 David Flagel’s presentation “Great Lakes forest restoration through top predator recolonization” earned second place in the science category. Overabundant white-tailed deer are damaging U.S. forests by hindering sapling growth. If predators reduce herbivore numbers and/or alter the herbivores’ behavior, then the plant communities may be restored. This interaction between the predators, herbivores, and plants is known as a trophic cascade. Flagel’s research focuses on whether the reintroduction of gray wolves could cause a forest cascade. He monitors deer herbivory on high and low wolf use areas in the Land O’Lakes area of Wisconsin. His early results show that deer in high wolf use areas were observed less frequently and maple sapling heights were twice as high in these areas as compared to low wolf use areas.  The significant negative impacts of deer observed in low wolf use areas were not present in high wolf use areas. These results suggest that wolves are generating a tropic cascade and promoting forest restoration.