The College of Science congratulates all students who completed research projects this summer. Of note are five Notre Dame students who conducted high energy physics research under the direction of physics professors Michael Hildreth and Philippe Collon. 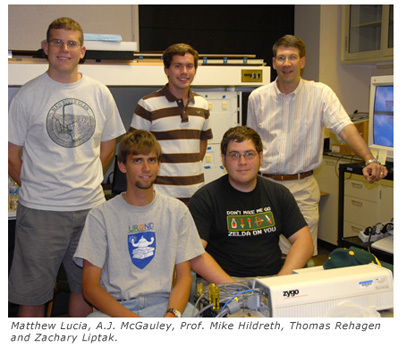 Thomas Rehagen worked with Prof. Hildreth on a team that included fellow undergraduates Matthew Lucia, Zachary Liptak and A.J. McGauley. The group is developing an optical instrument to detect motion of components in a linear accelerator, so the energy of the beam can be measured accurately. Rehagen said, “This program’s been a great introduction to physics research in general and high energy physics as well.” He expects to do graduate work in high energy physics. Rehagen was a recipient of the College of Science Summer Undergraduate Research Fellowship (SURF) while McGauley received a stipend from the College of Science/College of Arts and Letters Honors Program. Funding for Lucia and Liptak comes from the Department of Energy and Hildreth’s Research Corporation Cottrell Scholar Award.

Kirk Post, worked in the Accelerator Mass Spectrometry Group with Prof. Philippe Collon. He analyzed data from an experiment, attempting to separate the Argon 39 isotope from the background. The isotope is an important tracer for ocean water and has potential for a role in detecting dark matter. Post also received a SURF grant from the College of Science. 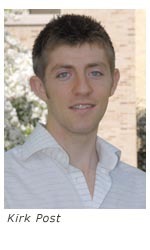 The researchers agree that their work gives them valuable experience in programming, machining, using electronics and conducting scientific analysis. Hildreth, who has worked with undergraduates in the summer for five years, says the COS-SURF program helped expand his team.