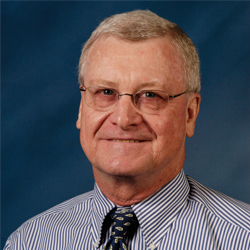 The obesity epidemic in this country should be of no surprise to anyone. But did you know that the environment in which you live has a high impact on your overall health? Dr. Patrick H. Casey M.D. ’67, vice chairman of the Department of Pediatrics and Harvey and Bernice Jones Professor of Developmental Pediatrics at the University of Arkansas, has done work into researching how social determinants affect the overall health of children.

Dr. Casey focused his talk as part of a lecture series on the theme of “everything is connected.”  In the case of children, everything related to their health is connected. The broadest social determinant, defined according to Dr. Casey as the “conditions in the environments in which people are born, live, learn, work, play, worship, and age that affect a wide range of health, functioning, and quality-of-life outcomes and risks,” is poverty. According to a 2014 study Dr. Casey referenced, 42.9% of Americans are near poor, 21.1% are classified as poor, and 9.3% are classified as living in deep poverty. This is alarming because poverty can bring about toxic stress (stress which is long-lasting, frequent, and high intensity) which alters stress, the immune system, and leaves people susceptible to suffering from anxiety and mood disorders. Poverty also directly affects the food that people eat.

Dr. Casey defines food insecurity as “limited or uncertain availability of nutritious and safe foods in socially acceptable ways.” As a means to combat poverty, families will often cutback on the quality and quantity of foods they eat. However, although this may seem to be a cost effective measure in the short term, the long term ramifications of food insecurity are staggering according to Dr. Casey. Food insecurity causes general health problems like diabetes and vitamin deficiencies, can affect educational achievement, and can cause mental health issues as well. Dr. Casey noted that as doctors and researchers, they often do the work in figuring out the problem, but not as much time in finding the solutions. However he and his team at the Arkansas Children’s Hospital have come up with an effective solution to combat food insecurity.

For medical professionals like Dr. Casey, food insecurity is considered a health issue, not a social issue. When asked if he believes that food is a kind of medicine, Dr. Casey wholeheartedly agreed that it is. His team began a process of screening families that visit his center to see if they are at risk of being food insecure. Within the four months that they started issuing food insecurity screenings to families, 43% of 4,100 patients were believed to have some level of insecurity. Of that 43% of patients, 877 of those patients were determined to be food insecure. Once the team determined a patient’s level of food insecurity, they began to offer the resources they need to combat the stresses of food insecurity. Awareness is key and the first step to solving a problem like this. Patients are directed to local food banks, offered classes that teach them how to shop for healthy foods while under a tight budget, and take general control over their health. As a result of screening efforts for patients, a 2015 survey reflected that national food insecurity has finally declined since the 2008 recession from 14% to 12.7%. It is with efforts like this that Dr. Casey hopes will bring about much needed health improvements for individuals for years to come.