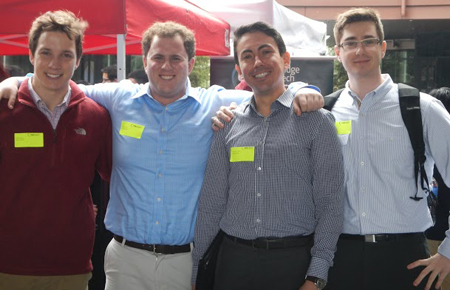 Seniors Sean McGee and Luke Smith met in freshman calculus in 2010 and have been friends ever since. Although their individual courses of study have taken different paths, they’ve come together over the last year to embark on an exciting entrepreneurial business venture called Imani Health.

McGee, a science preprofessional and music double major, has been working on research related to the Paper Analytical Device (PAD) Project since his sophomore year. The PAD Project is a research collaboration between several researchers, including Marya Lieberman, associate professor of chemistry and biochemistry at the University of Notre Dame, and Toni Barstis, professor of chemistry and physics at Saint Mary’s College.  The researchers have developed a method to test for substandard and counterfeit pharmaceuticals in low-resource settings through a simple, inexpensive paper-based test. The research has progressed to the point where the scientists are now looking for ways to commercialize the production of the PADs.

Smith, who is enrolled in the Science/MBA dual degree program, knew about McGee’s work on the PAD Project and wanted to find a way to get involved. Smith brought in two of his MBA classmates, Chase Lane and Valeriano Lima, and with the addition of ESTEEM student Amanda Miller ’13 SMC, Imani Health was born.  The group’s name comes from the Swahili word “Imani,” which means “faith.” Imani Health’s mission is to provide people with faith in their pharmaceuticals.

Last fall, Imani Health submitted a business proposal to OneStart, a competition for life science entrepreneurs who have ideas for innovative technologies with the potential to deliver meaningful impact on patients’ lives. The group’s proposal was one of 35 to successfully advance to the semi-final round and in February, Lane, Lima, McGee, and Smith traveled to Stanford University to attend OneStart’s Biotech Business Bootcamp.

At the day-long conference, the students received a crash course in launching a start-up business in the biotechnology field. They also had the opportunity to give one minute business pitches to patent lawyers, scientists, entrepreneurs, consultants, and venture capitalists and in return, the industry experts asked questions and provided advice based on their background.  At the end of the day, the team gave a five minute presentation to all of the industry experts in attendance about its business idea and fielded questions. “We were able to get a lot of great ideas and threads from the short meetings that we were able to pull out and focus on for our pitch,” Lane said. 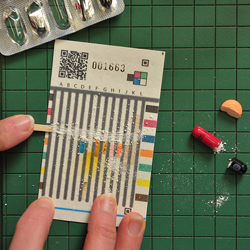 Imani Health is currently developing a five to ten page business plan with a mentor from OneStart who is a consultant in the pharmaceutical industry. Once the plan is finalized, the group will submit its business plan to the OneStart committee, and if the group successfully moves past this round on April 1, Imani Health will be one of 10 companies left to compete for the final $150,000 prize in May.

“I have a new perspective on how to take an idea in lab and see how it can have an effect on people’s lives,” Smith said. “Not only can I help develop the idea, but I can really turn it into something that can have an impact.”

“Professors Lieberman and Barstis have high hopes for the PAD project and have been incredibly supportive. They have shared their vision with us and trusted us to do this. It’s really humbling,” said Lane.

The students agree that the networking opportunities with fellow entrepreneurs and industry leaders have been a tremendous asset throughout the whole process. “The last six to eight months have been really powerful for me. I’ve met people with similar interests, people who have taken something and found ways to achieve it,” said Smith. “The Notre Dame community has been really great too. We’ve had people with anywhere from two to 25 years of experience offering their expertise. It’s the Notre Dame family way – people want to help.”

“This whole experience wouldn’t have been possible without help from so many people at Notre Dame.” McGee added. “We even received travel grants from the College of Science and College of Business to pay for our transportation and lodging to participate in the OneStart event.”

No matter how the competition turns out, the experience has had a lasting impact on all of the students. “I eventually want to work with start-ups and scientists to move ideas out of the lab,” said McGee.

In addition to participating in the OneStart competition, Imani Health also submitted a business plan to the McCloskey Business Plan Competition and will be one of 12 teams to present their business ideas to a panel of judges in the semi-final round on April 10. The final round of the McCloskey Competition will be open to the public on April 11 in the Mendoza college of Business.