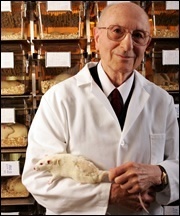 Morris Pollard, professor emeritus of biological sciences and director of the University of Notre Dame’s Lobund Laboratory, died Saturday (June 18) at Memorial Hospital in South Bend. He was 95 years old.

A prominent member of the Notre Dame faculty since 1961, Pollard was graduated from The Ohio State University in 1938 and earned master’s and doctoral degrees from Virginia Polytechnic Institute and the University of California Berkeley in 1939 and 1950, respectively.

Pollard had already done seminal research on viral diseases, discovering the first retrovirus in 1938, and was pursuing research on avian leukemia for the U.S. Department of Agriculture, when World War II began. He served four years in the U.S. Army’s Veterinary Corps at Fort Sam Houston in San Antonio, Texas, where he investigated and tested vaccines for exotic diseases then afflicting soldiers in the Pacific, such as Q–fever, typhus, primary atypical pneumonia, and “Bullis Fever.” Exposure to these made for dangerous work which killed two of Pollard’s colleagues and left several others with permanent disabilities. Pollard himself received the Army Medal, among the highest military honors for heroism outside of combat.

After the war, Pollard joined the faculty of the University of Texas Medical Branch in Galveston, where his pathbreaking research included the development of the first serologic test for hepatitis A. While his research career was in full bloom in Galveston, he was approached in 1961 by Notre Dame’s then-new president, Rev. Theodore M. Hesburgh, C.S.C., who invited him to come to Notre Dame to take over its Lobund Laboratory, the University’s biological research facility which was then in decline. “During my meeting with Father Hesburgh, I expressed some trepidation about how I, as a Jewish person, might fit in at Notre Dame,” Pollard remembered years later. “He told me, ‘You’ll fit in fine. All of us at Notre Dame are trying to get out of our own ghettoes.’”

Father Hesburgh predicted accurately, and Pollard’s research and teaching flourished here. As Lobund director, he oversaw the University”s longest running medical research program for nearly half a century, published more than 300 scientific articles, developed a unique breed of germ–free “Lobund–Wistar” rats to study the mechanisms of disease. He also continued his investigations of virology and cancer, developing, among other things, bone marrow transplants to treat leukemia and sarcomas, for which he was honored with the Hope Award from the American Cancer Society.

Pollard worked at all of these things until his very last days. “I can’t imagine doing anything else,” he said recently. “I think if you are doing something meaningful and important and you stop doing it, you’ll always look back with regret.”

One regret, and a bitter one, burdened the last quarter century of Pollard’s life. His son, Jonathan Jay Pollard, a former civilian intelligence analyst for the U.S. Navy, is serving a life sentence in federal prison for espionage, having been convicted of spying for Israel in 1985. Since then, Pollard continually and unsuccessfully appealed for clemency for his son.

In addition to Jonathan, Pollard is survived by another son, Harvey, of Potomac, Md., a daughter, Carol Pollard–Levy, of Hamden, Conn., two grandsons and five great-grandchildren. His wife of 63 years, Mildred, died in 2003.