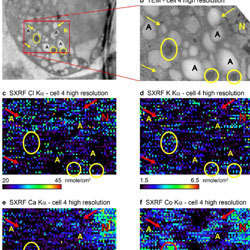 Yoav Kashiv, a visiting scholar in the Department of Physics, is the lead author on a recently-published paper about breakthrough success at imaging trace elements in individual organelles within the cell. The paper, “Imaging trace element distributions in single organelles and subcellular features”, was published in February in the journal Scientific Reports. Kashiv’s collaborators are Jotham R. Austin II (University of Chicago), Barry Lai, Volker Rose, Stefan Vogt (Argonne National Laboratory), and Malek El-Muayed (Northwestern University).

Until a few years ago, researchers studied the cell as one unit in terms of its chemical composition. Subunits of the cell, called organelles, such as the nucleus or mitochondria, are usually studied in large groups of many organelles of a certain type from many cells. In this study, the researchers focused on individual organelles to determine the distributions of such elements as chlorine, potassium, calcium, cobalt, nickel, copper, zinc, and cadmium. This method will allow researchers to compare the compositions of individual organelles from, for example, cells of healthy and diseased organs.

The measurement combined Transmission Electron Microscopy (TEM) and Synchrotron X-ray Fluorescence (SXRF), using two beamlines at the Advanced Photos Source (APS), the synchrotron at Argonne National Laboratory. One of these beamlines, that of the Center for Nanoscale Materials (CNM), focuses the X-ray beam to 40 nanometers, currently the highest X-ray resolution of any synchrotron in the world. Since organelles are very small, the high resolution was crucial for the successful measurements. Careful preparation of the cell samples was critical as well to the success.

The project started when Kashiv joined forces with El-Muayed, an endocrinologist, who was seeking to determine the effects of cadmium on insulin production and its connection to type 2 diabetes. Eventually, the success was the result of each collaborator contributing his expertise. “We don’t look at the cell as one unit, but we actually break it down to its different components and look at how chemical elements are distributed within the cell,” Kashiv said. “That opens up a new frontier of studying the individual components of the cell and their effect on cell function.”