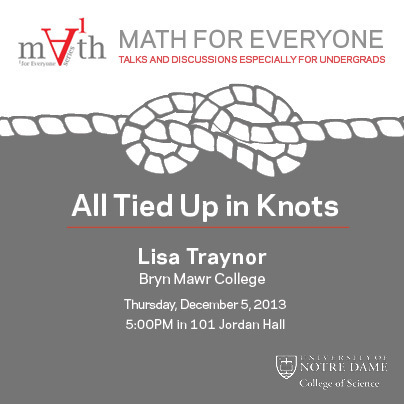 This past Thursday (Dec. 5) at the last Math for Everyone lecture of the semester, Lisa Traynor, Professor of Mathematics at Bryn Mawr College, delivered a presentation titled, “All Tied up in Knots.” Traynor explained how a mathematician thinks about knots, how knot theory can be applied scientifically when modeling DNA-enzyme interactions, and how particular knots have interesting images that we encounter in our everyday lives.

Some examples of everyday knots include necktie knots, shoelace knots, and knots in logos. Mathematically, however, a knot is defined as a single, closed curve in space that can move by stretching, shrinking and twisting, and it cannot cross itself. Two other types of mathematical objects related to knots include a link, which is two or more non-intersecting knots, and a tangle, which is a set of strings attached to fixed points on a sphere.

Traynor explained how DNA is a double-stranded helix, which is a model with curves and links and that it must undergo changes such as replication, transcription, and recombination that enzymes must mediate. However, since we are unable to observe enzyme action, we must deduce facts about enzyme mechanisms by detecting topological changes through models that explain gel electrophoresis results. Traynor gave the example of Tn3 resolvase data that started with an “unknot” and finished with a Hopf link, Fig-8 knot, Whitehead link that yielded link/tangle equations. 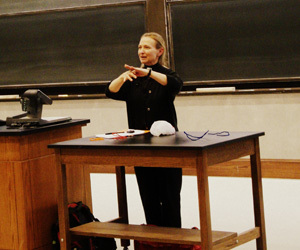 Traynor also introduced knots that satisfy an additional geometrical condition known as Legendrian knots. Traynor’s research focuses on finding Legendrian invariants in algebraic and geometric forms. Everyday Legendrian knots can be found in ice skating when the position and skate angle form a Legendrian curve in a space that looks like a solid donut. These knots can also be found in parallel parking, straight-in parking, and the evolution of an ellipse.

Math for Everyone is a series of math-related lectures, especially for undergraduates.  Anyone, from future Fields medalists to math phobes, is welcome to attend.