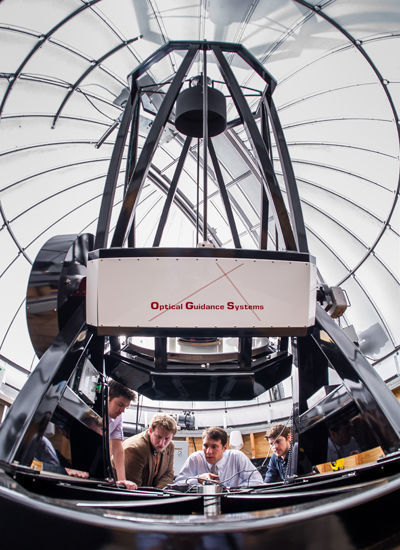 The group that oversees the Large Binocular Telescope (LBT) has selected the team led by Justin Crepp, the Freimann Assistant Professor of Physics at the University of Notre Dame, to build a new astronomical spectrometer named “iLocater” for its next-generation of instruments. The instrument was selected from among new hardware concepts proposed by the LBT observatory's domestic and international partners.

iLocater is an ultra-precise spectrometer that will be built in the astrophysics laboratory at Nieuwland Science Hall. It will detect and study Earth-like planets located within the habitable zone around the nearest stars. In addition to determining planetary orbits as well as their mass and density, iLocater will also probe their atmospheres to assess chemical composition. The group that approved the project included the LBT science steering committee, board, and observatory director.

iLocater is the first high-resolution astronomical spectrometer designed to operate at infrared wavelengths and behind an adaptive optics system which corrects for image blurring effects caused by Earth’s atmosphere. Crepp, says the results from NASA’s Kepler space mission have motivated his research by discovering several planets in the habitable zone around distant stars – some 500 light-years away.

“Kepler is telling us the statistics of exoplanets and that Earth-like worlds may indeed be common,” he says. “We would like to build an instrument that searches for planets much closer to home … the solar neighborhood must be teeming with small terrestrial worlds with potentially hospitable climates. By studying these planets, we can learn about their physical properties to place the existence of Earth (and its inhabitants) into context.”

Crepp’s instrument is supported in part by a NASA Early Career Fellowship that will help fund iLocater’s initial development stage. However, he is seeking additional support to complete the project. The technology being developed at Notre Dame will allow for extrasolar planet studies of unprecedented detail.

“We can probe their atmospheres and ask the question: ‘Do these planets have a similar composition as the Earth? Do they have oxygen, carbon dioxide, nitrogen, and all of the other chemical constituents that we think may be necessary for the development of life?’” Crepp says. “Now, instead of speculating about life, we are one step closer to answering that question.”