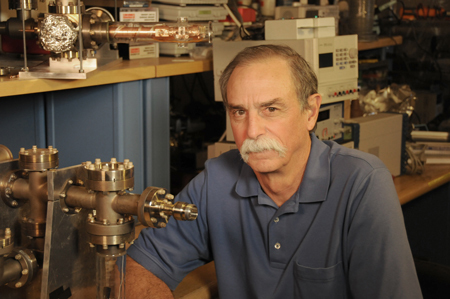 Nobel-laureate physicist David J. Wineland of the National Institute of Standards and Technology, Time and Frequency Division in Boulder, Colo., gave a presentation to a full house on Mar. 18 (Wednesday) at the Carey Auditorium in the Hesburgh Library. The lecture entitled, “Quantum Computers and Raising Schrödinger’s Cat,” discussed quantum computers, their history, mechanics, and future in the world.

As a potential next generation of computers, quantum computers use the power of atoms and molecules to perform memory and processing tasks at much faster rates than any silicon-based computer. Given their potential, there has been a lot of hype and confusion about quantum computers. In 2014, TIME magazine published an article on quantum computers claiming no one really knows what they do or how they work. A Canadian-based company, D-Wave, is selling their quantum computers for $10 million dollars, which, the article claimed, might be able to help cars drive themselves and boost the GDP. With such claims floating around, Wineland focused his talk on shedding some light on these powerful machines.

Wineland’s work with quantum computers stemmed from research with Jim Berquist, a Notre Dame graduate, on an atomic clock project. The two researchers developed optical atomic clocks by using laser cooling to slow the movement of the atoms. By trapping ions in a high vacuum at 4 Kelvin (-452 °F), they stopped almost all atomic collisions. Wineland used similar techniques in the development of quantum computers.

During the presentation, Wineland distinguished these powerful quantum computers from classical computers by explaining the difference in data storage. A classical computer storage bit has two “settings:” (0) and (1); however, quantum “qubits” have these two settings in addition to “superpositions” of those original settings. These superpositions mean that the storage bit can exist in both states at once. This idea makes no sense in our ordinary life; it is analogous to a marble in a bowl that exists on both the right and left side of that bowl at the same time.

There are over thirty universities and institutions currently working on using atomic ions to pursue quantum information processing. Despite all of the exciting developments, there are still some problems to overcome, such as reducing the error rates in the current quantum computer models.

So what is in the future for quantum computers? Researchers are looking for ways to develop higher quantities of improved qubits to reduce the number of errors in the systems. It is certain that these computers will drastically increase storage ability and processing capacity, leading to exciting computing possibilities. One of the ultimate goals of quantum computers is creating a highly efficient factoring machine.

Wineland is a fellow of both the American Physical Society and American Optical Society, and was elected to the National Academy of Sciences in 1992. He has received many awards during his career, most notable being the National Medal of Science, awarded to him in 2007 for the engineering sciences and the Nobel Prize in 2012. Wineland’s lecture was sponsored by the John A. Lynch Lecture Series in the College of Science and hosted by the Department of Physics.