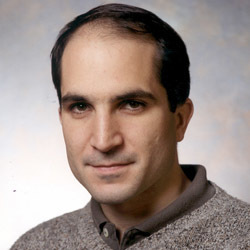 This past Wednesday (Nov. 6), the John A. Lynch Lecture Series and Department of Physics welcomed Juan Maldacena, a professor from the Institute for Advanced Study in Princeton, NJ for a presentation titled, “Strings, Gauge Theories and Gravity.”

In one of the most-cited papers in the history of physics, Maldacena discovered a hidden relationship between Einstein’s theory of gravity, which describes black holes and the universe as a whole, and quantum field theories, which describe the interactions of subatomic particles. He is now using that relationship to connect our understanding of nuclear physics to black holes, and to connect string theory to cosmology.

In his presentation, Maldacena described this relationship between theories of particle physics and theories of dynamical space-time/gravity. Einstein’s theory of gravity postulates that space-time is a dynamical entity, and like any dynamical system, it is also subject to the laws of quantum mechanics. Therefore, gravity should be described by some quantum theory, and finding that description is a major goal of Maldacena’s work. Throughout his talk, Maldacena connected ideas about quantum gravity to the well-established theories of particle physics, such as the theory that describes the standard model, or more particularly, the theory of the strong nuclear interactions, called quantum chromodynamics. 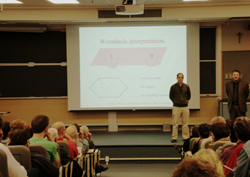 Originally from Buenos Aires, Argentina, Maldacena obtained a six-year degree from Instituto Balseiro in Argentina and later earned a Ph.D. at Princeton University. He is also a former professor of physics at Harvard University.