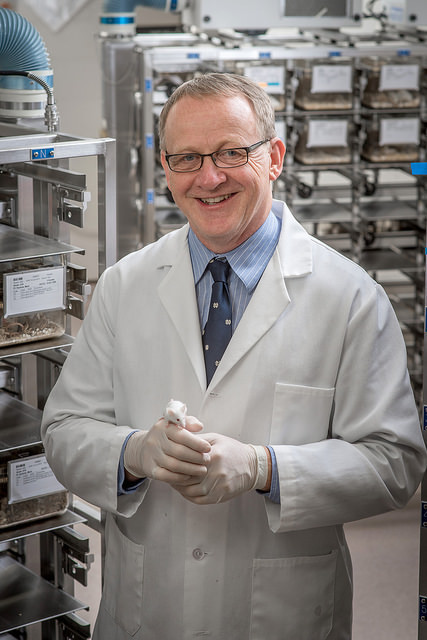 Mark Suckow, DVM, associate vice president for research compliance and research professor of biological sciences at the University of Notre Dame, was named the recipient of the 2014 Charles A. Griffin Award from the American Association for Laboratory Animal Science (AALAS). The Griffin Award recognizes individuals who demonstrate ethical science and/or technological advancements in humane experimentation or improved animal care practices. Suckow was recognized at the association’s annual meeting in San Antonio in October.

Established in 1950, the mission of the AALAS is to advance responsible laboratory animal care and use to benefit people and animals. With over 14,000 members worldwide, AALAS provides educational materials, administers certification programs, publishes scholarly journals, supports laboratory animal science research, and serves as a forum for the exchange of information in the care and use of laboratory animals.

Suckow served a one-year term as president of AALAS in 2006. During his tenure, he launched programs to establish a government relations efforts, as well as programs to strengthen science within the AALAS.

Joining the Notre Dame faculty in 1983, Suckow, who also serves as director of Freimann Life Sciences Center, is well-respected in his field. He has authored or edited more than 100 scientific papers, book chapters, and books, including The Laboratory Rabbit, Guinea Pig, Hamster, and Other Rodents, which won a Prose Award in 2012 from the American Association of Publishers.  In 2013, his research on cancer vaccines was used as the basis of a new start-up company, Torigen Pharmaceuticals, Inc., launched by three Notre Dame entrepreneurship master’s students.