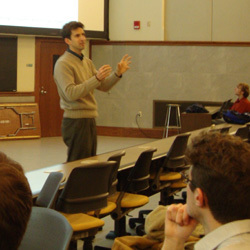 This past Thursday (Mar. 20) at the Math for Everyone lecture series, Arlo Caine, assistant professor of mathematics and statistics at California State Polytechnic University in Pomona, gave a presentation titled “The Shape of Information.” His lecture was focused on an ingenuous application of an existing mathematical theory that’s relevant for the 21st century, particularly in helping people understand how to think about large data sets of information.

Throughout his lecture, Caine explained how people take information that is recorded and think about it in terms of some sort of shape. Mathematics is applied when we try to summarize the essential features of the shape in a way that we can visualize, even though it may be in dimensions beyond our capability to think about. The mathematical theory that makes this possible is known as topology.

Professor Gunnar Carlsson from Stanford University figured out how to take the subject of topology and apply it to  summarize the essential features of big data sets gathered by companies like Facebook and Google. Through continued success, Carlsson and his collaborators have formed a company named Ayasdi located in Silicon Valley’s tech industry.

Caine also explained how topology has been applied to cancer research.   Carlsson and collaborators recently identified a group of breast cancer tumors with 100% survival which were previously unidentified among known breast cancers. These tumors were identified using genetic information from tumor tissue by applying topology to describe the essential features of the shape of the data; there was no way medical researchers could identify this beforehand due to the complexity of the information. Understanding its shape brought about this insight.

“This was a major breakthrough. Cancer research is one of many exciting applications of topology and many more are brewing within this company,” said Caine.

Math for Everyone is a series of math-related lectures, especially for undergraduates. The next Math for Everyone lecture, "Combinatorics and Card Tricks" will be held Thursday, April 10 at 5:00 p.m. in 105 Jordan Hall of Science. Everyone, from Fields medalists to math phobes, is welcome to attend.