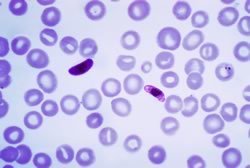 Marvin Miller, the George and Winifred Clark Chair in Chemistry, and Michael Ferdig, associate professor of biological sciences at the University of Notre Dame are co-authors of a recently-published study in the Journal of the American Chemical Society on a potential breakthrough in the fight against tuberculosis and malaria—global diseases that each kill some 2 million people a year.

In an interdisciplinary project, the researchers synthesized an iron transport molecule attached to an antibiotic that the tuberculosis bacterium would gladly ingest as a “Trojan horse”, a method that has proven to be successful for the Miller lab in other studies. The peroxide drug, artemisinin, is a leading antimalarial agent but is not effective alone against TB, whose cell membrane is difficult to penetrate. Chemistry triggered by the cell’s efforts to use the iron in the transporter enables the drug to destroy the bacterium.

“It’s all about delivery,” Miller says, “and getting the lethal agent into the bacterium. Our study suggests that it works against TB by the same method that would work to kill malaria which is pretty exciting.” About one-third of the world’s population is infected with the bacterium that causes TB, and 40 percent of the world is affected by malaria. The standard regimen for TB treatment involves multiple drugs taken for six to eight months. Highly drug-resistant strains of the TB bacterium have evolved while no new effective antibiotics have been introduced for decades.

The research demonstrates the utility of “Trojan horse” drug design and how it could be used to target both malaria and TB. The molecule, while effective, may be too complex for commercial medicinal use, but researchers are already pursuing ways to make simplified versions. Garrett Moraski, a research assistant in Miller’s lab, has identified some elements of the molecule that by themselves are equally effective against TB.

The article, “Design, Synthesis, and Study of a Mycobactin-Artemisinin Conjugate that has Selective and Potent Activity against Tuberculosis and Malaria,” was published February 17. Collaborators include researchers from Duke University, the National Institutes of Health and the Liebniz Institute for National Product Research and Infection Biology in Germany, as well as graduate students, postdoctoral fellows and laboratory assistants at Notre Dame.