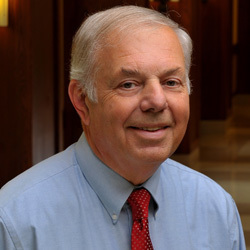 Oncologist Rudolph M. Navari, M.D., Ph.D., FACP, associate dean and director of the Indiana University School of Medicine-South Bend and an adjunct professor of chemistry and biochemistry at the University of Notre Dame, has received a $2.1 million grant for a national study to address chemotherapy-induced nausea and vomiting (CINV).

The four-year study, funded by the National Cancer Institute (NCI), will determine the efficacy of the anti-psychotic olanzapine to assuage both nausea and vomiting among patients being treated with highly emetogenic chemotherapy.

The study builds on groundbreaking clinical trials done by Navari that demonstrated that olanzapine—now available for about 45-cents a dose— is highly effective in mitigating the often debilitating effects of chemotherapy. The impact is positive both immediately after chemotherapy, and two to four days after treatment, when some patients experience breakthrough nausea and vomiting. Patients in the early trials experienced no negative side effects from the olanzapine.

In the NCI study, the physicians of breast and lung cancer patients across the country will administer a protocol that pairs olanzapine with other antiemetics to be given prior to the administration of the chemotherapy treatments. The study will screen for nausea and vomiting experiences the day chemotherapy is administered and the four days following treatment.

Navari is the principal investigator of the four-year study, in partnership with Charles Loprinzi of the Mayo Clinic and Steven Grunberg of the University of Vermont. The grant will support a multi-institution, double-blind, placebo-controlled clinical trial. Navari is a fellow and former co-director of the Harper Cancer Research Institute, a joint effort between IUSM-SB and Notre Dame.

If the study bears out the positive effect of olanzapine, prescribing it will become a standard in cancer treatment, Navari said.

Eliminating the nausea and vomiting associated with chemotherapy is considered a high priority in cancer research because of the debilitating nature of the side effects. Post-chemotherapy illness has been known to impact a patient’s decision to pursue a full course of treatment, or force a physician to decrease the potency of treatment.