Service has always been a big component of Delaney Weiland’s life at the University of Notre Dame. A senior neuroscience and behavior student, Weiland’s commitment to community engagement has stood out from others, and she recently received the Richard J. Wood Student Community Commitment Award from the Indiana Campus Compact.

The award recognizes the “commitment, creativity, and excellence our partner campuses spread across all aspects of community-campus partnerships that lead to improving tens of thousands of lives in Indiana and beyond,” according to the organization. 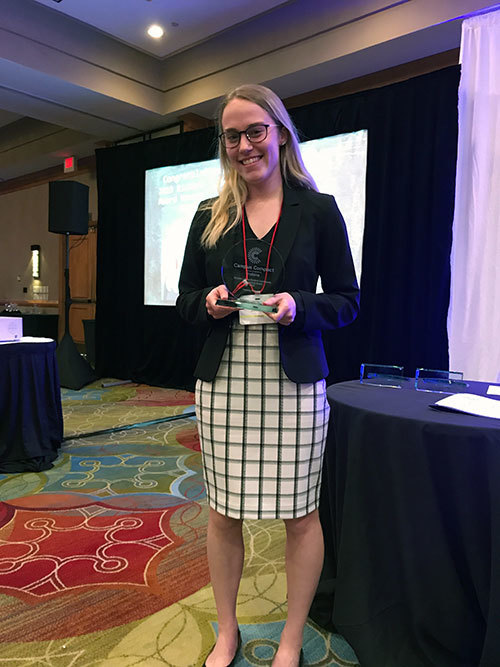 Weiland has participated in two Summer Service Learning Programs (SSLP) and has taken part in several seminars through the Center for Social Concerns (CSC). While Weiland took part in a SSLP after her first year at Notre Dame, it was in her junior year that Weiland realized how important community engagement meant to her. Her experience going to the Andre House of Hospitality for persons experiencing homelessness in Phoenix, Ariz., taught her the importance of reaching out to those who are on the margins of society. “It was at that point in my life that I decided to not be so wrapped up in my own world,” Weiland said. “I signed up for Andre House on a whim, but it ended up being something that made me realize that the world is a much bigger and more beautiful place than I can see from just viewing the world from my perspective all of the time.”

In addition to her involvement with the CSC, Weiland has also been spending time every week at the South Bend Center for the Homeless, where she works primarily with the children living at the center. “It’s just kind of crazy to see how the effects of living through poverty and everything these kids go through play out in their daily lives,” Weiland said.

Weiland’s commitment to service attracted attention from multiple people, including Nancy Michael, the director of undergraduate studies for the neuroscience and behavior program. “Delaney is brilliant, sincere, compassionate and deeply invested in improving the lives of those around her by putting her education to work and serving her community,” Michael said. “For years, her actions have demonstrated her commitment to the broader community and I am grateful she has been recognized for her deep dedication to service.”

Weiland’s ultimate goal is to go to medical school to become a doctor for marginalized populations. Her class, Theological Perspectives on Poverty and Health, was a major catalyst in shifting her perception of medicine. “I had never learned about social determinants of health or the kind of barriers in society for marginalized people to be healthy,” Weiland said. “I had already wanted to be a doctor, but this class made me rethink what that would look like and what role I would want to play as a clinician.”

However, before medical school, Weiland wants to dive deeper in community engagement by joining the Bon Secours Volunteer Ministry to do healthcare work with impoverished communities in Baltimore, Md., after graduation. She hopes that her career in medicine will allow her to better understand people experiencing poverty and be an advocate for those on the margins.