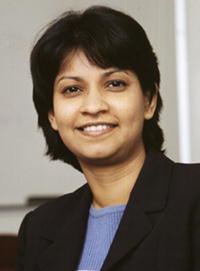 A new study by a team of researchers led by Crislyn D’Souza-Schorey, associate professor of biological sciences at the University of Notre Dame, sheds light on the molecular basis by which tumor cells modulate their surroundings to favor cancer progression.

The study elucidates mechanisms involved in the release of microvesicles –small membrane enclosed sacs – from tumor cells that facilitate creation of paths of least resistance allowing tumor cells to migrate. The research offers new insights into how tumor cells invade their surrounding environment and may eventually lead to improved methods for measuring the progression of cancers.

The research paper, which appears this week in an early online edition of the journal Current Biology, identifies a unique population of microvesicles that are enriched in proteases-mediators of tissue degradation. The release of these microvesicles provides a mechanism of tissue breakdown and remodeling at distant sites and is distinct from the better-characterized mechanisms involved in tissue degradation adjacent to the leading edge of tumor cells, D’Souza-Schorey notes.

The new study shows that microvesicle shedding requires localized contraction of the cell’s cytoskeleton at sites of microvesicle release and identifies some key regulators involved in the process. One of these critical determinants is the protein ARF6. Understanding the role of the ARF6 protein in cancer progression has been a longstanding interest of the D’Souza-Schorey laboratory. Earlier studies from the laboratory using cell and animal tumor models had documented a role of ARF6 in tumor cell invasion.

Although our investigations have utilized melanoma and breast tumor cell lines, microvesicle release has been observed in a variety of tumors making this study broadly applicable.” 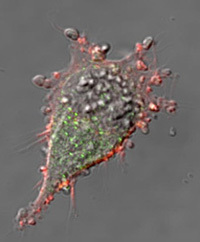 Microvesicles derived from tumor cells also contain other biologically active molecules such as oncogenic receptors and molecules that allow evasion of the immune response. The researchers have now shown that specific tumor cell components are selectively targeted to microvesicles, which then function as specialized units that can communicate with or modulate the surrounding environment.

“Studies have shown that once shed, microvesicles can be detected in biological fluids such as blood, urine and ascites and therefore could potentially serve as prognostic and predictive biomarkers for disease progression,” D’Souza-Schorey said. “A blood test to monitor the progression of cancer or effectiveness of therapy would be of immense benefit.”

The D’Souza-Schorey laboratory is working to explore this potential further in conjunction with Notre Dame’s Advanced Diagnostics and Therapeutics initiative and local oncologists.

Vandhana Chari, a senior researcher in the laboratory, is the primary author on the research article. James Clancy, a graduate student and a recipient of Lilly and GLOBES graduate fellowships; and Carolyn Plou, a former undergraduate student researcher, also were part of the research team at Notre Dame involved in the study. The research was supported in part by a grant from the National Cancer Institute to D’Souza-Schorey.