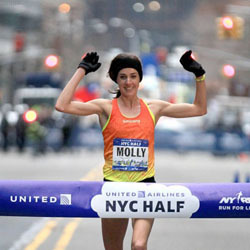 On Sunday, March 15, Molly Huddle was the first American to win the NYC Half Marathon in the women’s field. She finished the run in 1:08:31, a new personal record.

Huddle won the race with an 11-second lead. In an interview with Runner’s World, she said, “I just kept pressing because I felt good today. [My three close rivals] were a step behind me so I felt maybe they were tiring.”

An accomplished runner, Huddle was a nine-time track and field All-American in the 5,000 meter run at Notre Dame. She made her Olympic debut at the 2012 London Olympics. She also set the American record in the 5000 meters at the 2014 Herculis Diamond League Meet in Monaco.

Huddle graduated from the University of Notre Dame with a Bachelor of Science in Biological Sciences in 2006.