Zebrafish are native to India’s Ganges river. About three centimeters long, they’re characterized by bluish stripes that run along their bodies. But until they’re about a week old, their bodies are translucent. One can witness organs—such as kidneys—being made in real-time.

The intricate anatomy of kidneys has presented many challenges to determining how the organ is made by renal stem cells. But understanding this process can be used to determine regenerative approaches to treat kidney disease, which affects more than 850 million people worldwide, which is twice as many as who have diabetes. 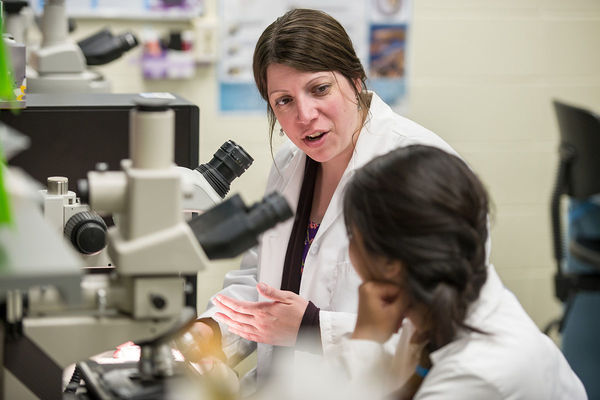 Rebecca Wingert, Elizabeth and Michael Gallagher Associate Professor in the Department of Biological Sciences at the University of Notre Dame, recently published findings in ELife that have revealed new insights into the genetic pathways that control kidney cell development. Wingert and her team investigated what happens when kidneys aren’t formed correctly in development, or congenital anomalies of the kidney and urinary tract (CAKUT). Some examples of CAKUT include renal agenesis (when one or both kidneys don’t develop) or renal hypoplasia (when part of a kidney does not fully develop).

Her research was performed using zebrafish to study how kidneys are made during development and regenerate after injury. Humans and zebrafish have a similar genetic structure, and about 84 percent of genes associated with human diseases have a zebrafish counterpart.

Researchers in Wingert’s lab had previously documented the results of a drug screen in which they tested how hundreds of chemicals affected gene expression in kidney precursors. Recently, led by third-year graduate student Joseph Chambers, the team followed up on a discovery related to controlling a gene they found, named Ppargc1a, also known as PGC1A in mice and humans.

PGC1A could be a pivotal player, Wingert, who is also affiliated with the Center for Stem Cells and Regenerative Medicine, explains. “The right amount of this protein is critical. If there’s too much, then it’s catastrophic for the nephron. If it’s not there, then the body can’t make certain cells correctly, and it leaves another protein called SIM1A out of balance. It has to be closely fine-tuned.”

Zebrafish are an excellent model to study how human kidneys develop, because they are anatomically and functionally similar, but they also don’t have the complexities that other animals may have.

“Zebrafish, mice, and humans all have kidneys composed of functional units known as nephrons. They are simple tubes, like the plumbing in your kitchen sink: You have a main tube that collects liquid and takes it out of the house to the sewer system. Zebrafish have two nephrons,” she said. “A mouse has approximately 2,000 nephrons, and a human up to about two million. The scale of magnitude is quite different. If you only have two, it’s easier to analyze and monitor what’s going on,” she says.

“We help flesh out the ingredient list,” she says. “If we know those key signals, we can hopefully guide cells to form better nephrons and know if they are correctly being made.”

There has been a steady increase in our knowledge about the different genes that encode key proteins, Wingert says. “It’s an exciting time for studies of kidney development and disease. We’re assembling more of those puzzle pieces. The challenge is how you fit them together. And we need to have lots of those pieces to understand the different recipes for making cells.”

She commends the graduate student team for their work, describing the group dynamic as "a striking example of training and talent" as they pursue their research.