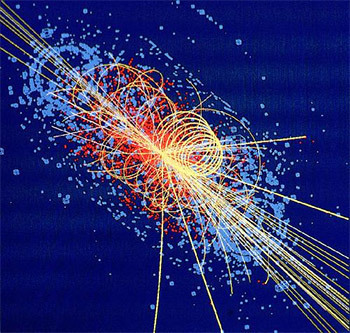 The DZero group, which includes Notre Dame researchers at the Fermi National Accelerator Lab near Chicago, has announced the discovery of evidence that could explain the predominance of matter over antimatter in the universe. The team found evidence for unexpectedly significant violation of matter-antimatter symmetry in the behavior of particles containing bottom quarks. The result has been submitted for publication in Physical Review D. Physicists in DZero and Collider Detector at Fermilab (CDF), another team, continue to collect and analyze data.


Both groups at Fermilab include Notre Dame researchers. Randy Ruchti, Mitch Wayne, Leo Chan, Mike Hildreth, Dmitri Smirnov and Jadwiga Warchol have been part of the DZero team that made discoveries last year that announced a measurement of the W boson mass, theoretically related to the Higgs boson. Kevin Lannon, assistant professor of physics, is a member of CDF and performed the final combination of six analyses that confirmed the discovery of single top quark production.