The National Science Foundation (NSF) recently announced the awardees of the 2015 Graduate Research Fellowships Program (GRFP). This year, eight College of Science students and two alumni received awards. In addition, several students and alumni received honorable mentions. There were over 16,000 applications for this year's GRFP with 2,000 awardees nationwide.

The fellowship provides three years of support for the graduate education of students who have demonstrated the potential for significant achievements in science and engineering research.  Past NSF Fellows include individuals who have made significant breakthroughs in science and engineering research, as well as some who have been honored as Nobel laureates. 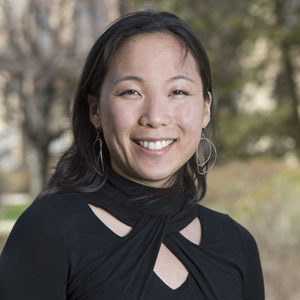 Claire Bowen is a second-year graduate student in the Department of Applied and Computational Mathematics and Statistics who studies statistical disclosure limitation (SDL), or methods of data privacy and confidentiality. She and her advisor, Fang Liu, are developing a technique using Bayesian statistics to preserve participant privacy without altering the integrity of the original data. Many entities – such as national security agencies, hospitals, and educational institutions – will directly benefit from this research in sharing their data safely with collaborators, striking a balance between the privacy of the respondents and the efficiency and validity of the statistical inference based on the released data.

“My motivation to conduct research in data privacy stems comes from my interests in education research," Bowen explained. "After graduate school, I plan to find a role where I can implement a different approach to education by determining new and better teaching methods when addressing shared data.”

This is the second major award for Bowen during her graduate career. In 2014, she was the named a Microsoft Research Graduate Women’s Scholar.  Bowen graduated with honors from Idaho State University in 2012 with a Bachelor of Science in Mathematics and Physics. 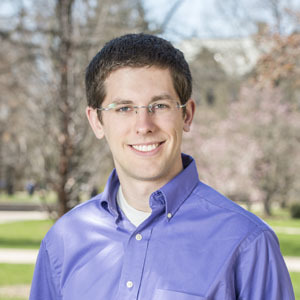 Warren Chatwin is a first-year biological sciences graduate student in the laboratory of Jeanne Romero-Severson. His research seeks to understand how oak trees can better adapt to environmental stresses, such as drought or flooding, caused by climate change. He hypothesizes that hybridization between oak tree species may create new adaptive gene combinations that increase survival under heightened environmental stress. To test his hypothesis, Chatwin is examining the genetic structure of second-generation hybrid seedlings to determine if they survive more often under increased environmental stress and if new gene combinations are shared among the surviving seedlings. This research will lead to a better understanding of the effects of a changing climate on forests, as well as the importance of hybridization in adapting to these changes.

“I have always been interested in forest trees. As an undergraduate, I studied the genetic diversity present in the remnant post oak forests across the lower Midwest,” Chatwin said. “When I realized how little is known about oak tree genetics, I decided to pursue graduate studies in this area to continue my research.”

Chatwin graduated in 2014 from Brigham Young University with a Bachelor of Science in Genetics and Biotechnology. 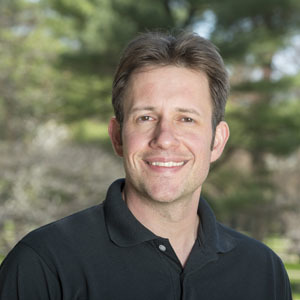 First-year biological sciences graduate student Jon D’Amico studies cell biology, specifically focusing on intracellular motor proteins. He studies a protein called StARD-9 that appears to be localized in the lysosomal membrane and may be involved in the transport of cholesterol within the cell. The goal of his work is to characterize the structure and function of StARD-9. This research may have many implications for diseases in which cholesterol transport is defective, such as Niemann-Pick Type C. D’Amico is advised by Kevin Vaughan.

D’Amico really enjoys the experimental side of science, versus the theoretical side. “I chose cell biology because it allows the incorporation of molecular and biochemical methods of investigation at a cellular level," he said. "I enjoy being able to look through a microscope and actually see my research in action. It gives my work more of a real feeling.”

D'Amico graduated from Indiana University in 2012 with a Bachelor of Science in Biology and Minor in Chemistry. 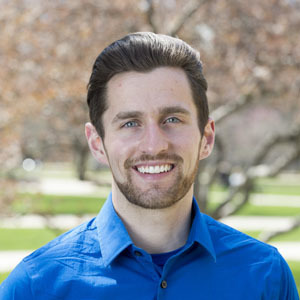 Working in the laboratory of Zachary Schafer, first-year graduate student Mark Hawk studies cellular death and its application to cancer. When epithelial cells detach from the extracellular matrix (ECM), which is often required for cell survival, they can induce a form of cellular death. When cancer metastasizes from the primary tumor site, the cells are no longer attached to their ECM. To successfully metastasize and spread, cancer cells must overcome and shut down all forms of cell death induced by ECM detachment to form a secondary tumor. Understanding the regulation of programmed cell death following ECM detachment can improve knowledge on how cancer metastasizes and eventually lead to treatments to alleviate metastasis.

Hawk was inspired early in his life to pursue a field in cancer research. “My sixth grade science teacher consistently challenged me to ask the question of how particular phenomena, both normal and abnormal, function. She lost her life to metastatic breast cancer, and as a result of her influence on me, I have been motivated to study cancer and better understand how cancer cells spread throughout the body," said Hawk. 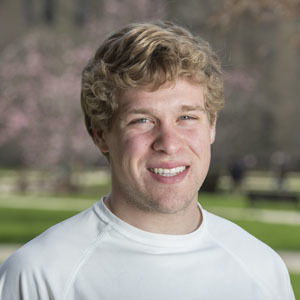 Patrick Marino is a dual-degree, fifth-year senior at Notre Dame in the College of Science and College of Engineering. Marino has completed a broad range of research as an undergraduate, both on and off campus. As a sophomore, he worked with Kevin Lannon to code a trigger system for a future upgrade to the Compact Muon Solenoid (CMS) at the Large Hadron Collider at CERN. In addition, he spent a summer at Georgia Tech’s REU program to design and fabricate an assistive robotic arm for quadriplegic patients.

“I really enjoy robotics," Marino said. "My goal is to develop a low-cost robotic prosthetic arm to be used by quadriplegic patients.” 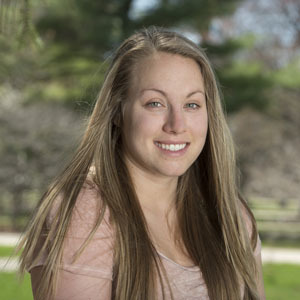 Second-year graduate student Amanda Marra works in the laboratory of Rebecca Wingert where she studies kidney development in zebrafish. Marra's research focuses on identifying the cellular process of nephron development, the functional unit of the kidney that produces urine and removes waste from the blood. Understanding of nephron and kidney development can have implications for better recognizing onset of kidney disease.

“I chose this field of study because I have always been interested in how different organs of the body develop,” Marra explained. “The kidney is an extremely useful model organ to study organogenesis and other aspects of biology. The knowledge gained from studying the pathways in kidney development can potentially provide insight into the development of other tissues in the body.”

Marra graduated from Lyon College in 2013 with a Bachelor of Science in Biology. Elizabeth Peuchen is a first-year graduate student in the Department of Chemistry and Biochemistry. Working with Norman Dovichi, her research focuses on studying protein expression level changes in Xenopus laevis (African clawed frog) during early development.  Xenopus laevis is a model vertebrae species able to regenerate its severed spinal cord. By understanding protein expressions change during development, she hopes to determine which proteins allow Xenopus laevis to regenerate their spinal cord while other vertebrates do not have the same ability.

“I have been fascinated by how and why things work since I was young," said Peuchen. "As an undergraduate, I took part in research at The Land Institute, Center for Disease Control (CDC), and Newman University. These experiences really develop my interest in chemistry.”

Peuchen graduated from Newman University in 2014 with a Bachelor of Science in Chemistry and Minors in History and Math. 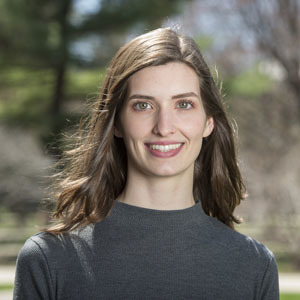 Senior physics major Annie Stephenson is an undergraduate researcher with Kenjiro Gomes.  Using a scanning tunneling microscope, her research focuses on creating artificially engineered electronic systems by picking up and placing individual atoms and molecules into desired patterns. This technique is used to create artificial lattices that are not possible in nature.  Tailoring the physics of two-dimensional electronic systems enables the creation of novel quantum devices that could eventually lead to advances in energy and technology.

“I first became interested in physics because I wanted to understand the world around me,” Stephenson said. “My interest grew as I discovered that I enjoy solving problems and working with my hands to build experiments.”

Stephenson will graduate in May with a Bachelor of Science in Physics. She plans to attend graduate school at Harvard University in the fall. 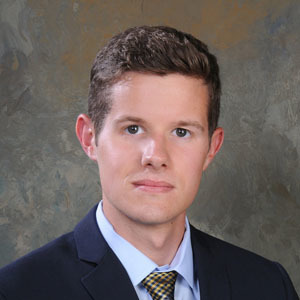 Mitchell Faulk graduated from Notre Dame in 2014 with a Bachelor of Science in Mathematics. As an undergraduate student, he was a member of the Seminar for Undergraduate Mathematics Research (SUMR) program and performed research with Katrina Barron.  Their research focused on vertex operator algebras, objects that model the structure of interactions of world-sheets of one-dimensional vibrating strings, up to conformal equivalence. This research area is a part of string theory, a theoretical physics framework that tries to model the current understanding of the universe by incorporating all known physical theories into one.

"I chose this field of study because I am motivated to understand models in physics and geometry from a rigorous mathematical viewpoint," Faulk said. " I will teaching and mentoring undergraduates and other students and hope I can inspire and challenge others to put their efforts into STEM fields as well."

Faulk is currently a first-year graduate student at Columbia University and plans to continue studying the intersection of math with physics and theoretical physics, especially in the fields of algebraic geometry and partial differential equations.  Faulk will return to Notre Dame this summer to lead a Research Experience for Undergraduates (REU) program. 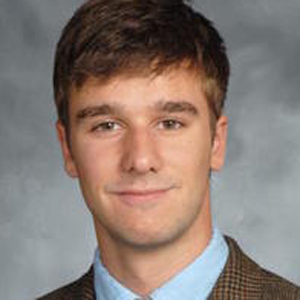 Michael Kipp is a first-year graduate student at the University of Washington studying the evolution of the Earth’s atmosphere over geologic time scales. He studies the production of greenhouse gases by microbes, which influence the composition of the atmosphere today and have caused dramatic atmospheric changes in the past.

"I became interested in this topic because changes in atmospheric composition today have important implications for global climate," said Kipp. "To better understand what might happen in the future, we can study the way the atmosphere has changed in the past."

Mentored by Gary Belovsky and Stuart Jones as an undergraduate student, Kipp studied methane emissions from freshwater lakes at the University of Notre Dame Environmental Research Center. Kipp graduated in 2014 with a Bachelor of Science in Biological Sciences.