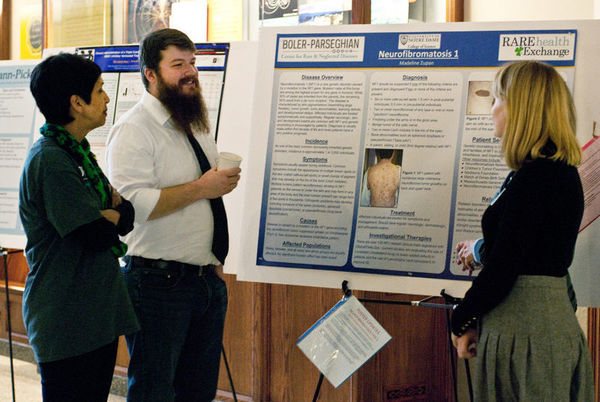 Kasturi Haldar, Director of the Boler-Parseghian Center for Rare and Neglected Diseases, (left) discusses one of the posters, about Neurofibromatosis 1, with biological science graduate student Stefan Freed and Brooke Gonzalez, a Notre Dame senior.

Hope Kern, 6, skittered between her parents and the posters in Jordan Hall, scribbling in a small notebook as her parents, Melissa and Tim Kern, spoke with students who presented the poster on Hope’s disorder. She is one of only about 40 people in the world diagnosed with Shprintzen Goldberg Syndrome, a connective tissue disorder. She, like other patients with this disorder, has various skeletal and cranial malformations among other symptoms. Researchers believe the disease is caused by novel gene mutations.

Research has been performed on only about 300 of the 7,000 known diseases, according to Kasturi Haldar, director of Notre Dame’s Boler-Parseghian Center for Rare and Neglected Diseases. A two-day Rare Disease Day Celebration hosted by the Center on Feb. 3 and 4 spotlighted some of these rare diseases, bringing together researchers and patients.

The Center builds partnerships among patients, health care providers, researchers, drug companies and others to support the discovery of new diagnostics and treatments for these diseases.

Researchers shared 25 posters on the first day of the conference, with 12 of those produced as classwork from two undergraduate courses, “Clinical Research in Rare and Neglected Neurological Diseases” and “Topics in Rare and Neglected Diseases.” Those posters focused on diseases specific to children and adults in the local area. Day two featured talks tailored around families who could travel to the event, along with eight other patients linked through video conferences.

It’s not that pharmaceutical companies and researchers are disinterested in rare diseases, Haldar stressed, but that the number of patients is so limited that clinical information is lacking.

“Rare-disease patients … it takes them a very long time to get a diagnosis, but they develop a lot of records,” Haldar said. As the students and researchers in the Center comb through those records, they create natural histories of different disorders.

“Basically, if you do not understand the natural history of the disease, you cannot project what happens,” she said. “If you understand these diseases, then you so much improve the treatment and management of them.”

Melissa connected with the Boler-Parseghian Center through an advertisement about research into rare diseases, shortly after the family moved to South Bend from Montana for work. She recounted the years of diagnostics and doctor visits that finally led to a couple of specific genetic tests confirming the Shrprintzen Goldberg Syndrome diagnosis. By then, Hope was 4.

The conference, now in its third year with a two-day format, “brings awareness, which is so important,” Melissa said.

Not only do families like the Kerns benefit from the conference, but Notre Dame students who may later become doctors or researchers are motivated by working with them, said Barbara Calhoun, outreach coordinator for the Rare Health Exchange with the Center.

“You get to meet the families, and it puts a little more fire under your feet,” said Stefan Freed, a graduate student in the biological sciences department. “You want to run back to the lab and hunker down and get back to work.” 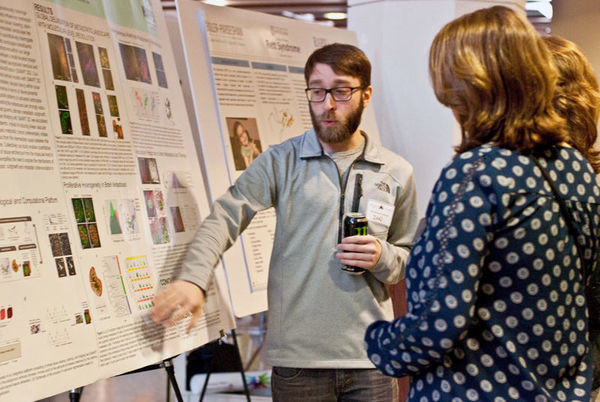