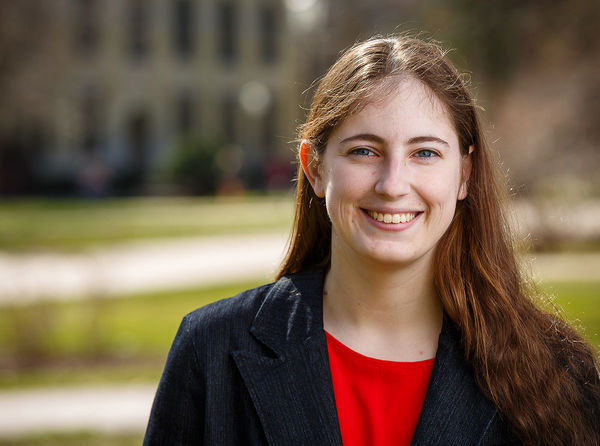 Research led by fifth-year graduate student Cheyenne Tait in the Biological Sciences laboratory of Jeffrey L. Feder at Notre Dame has identified structures on the antennae of Rhagoletis flies that could explain why the flies are on their way to diverging into two distinct species even though they are not geographically separated. Tait hypothesizes that the behavior-based differentiation results from the flies’ sense of smell. An article on the findings, “Sensory specificity and speciation: a potential neuronal pathway for host fruit odour discrimination in Rhagoletis pomonella,” was published in Proceedings of the Royal Society B: Biological Sciences. Authors, in addition to Tait and Feder, are Srishti Batra, Sree Subha Ramaswamy, and Shannon B. Olsson, all of the National Centre for Biological Sciences at the Tata Institute of Fundamental Research in Bangalore, India. The research in this publication looks for the tiny neurological change that shifted the flies’ preference for the smells of their host fruits, which has in turned influenced the trajectory of their evolution.

The divergence began nearly 200 years ago, when domestic apples were introduced to North America and part of the Rhagoletis pomonella population, which historically mated and matured on the fruit of the native downy hawthorn, switched to the new fruit and earned the name “apple maggot fly.” Scientists now consider them “host races,” apple and hawthorn, a step toward speciation. Each group’s life cycle follows its fruit’s season—the apple race emerges early with the apples, the hawthorn race later with the hawthorn—so they rarely encounter each other for breeding. Significantly, they find their fruit by olfaction, the sense of smell, and each is repulsed by the fruit that attracts the other.

Tait examined the peripheral sensory neurons on the flies’ antennae that receive external scents and project them into the brain. After further processing of the signals, attraction or avoidance behavior is elicited which leads to the flies choosing between host fruits. She found no difference between the olfactory sensory neurons at that level—both apple and hawthorn flies have the same pattern of organization of two pairs of neurons. Thus Tait is conducting further research using optical imaging and neural tracing techniques to investigate potential differences in the flies’ wiring between antennae and brain. The paired neuron arrangement means that a simple switch could account for the divergence.

The work continues research by Feder, who studied under Guy L. Bush, a pioneer in the field of evolution, and Olsson, Tait’s co-advisor who opened the line of inquiry on the sense of smell in the apple maggot about 10 years ago. Research on insect olfaction was initially conducted on moths, but now advances in equipment have allowed detailed neurological study in non-model systems, such as the apple maggot fly. The current article therefore offers a beginning, rather than a conclusion, to research involving Rhagoletis olfaction.