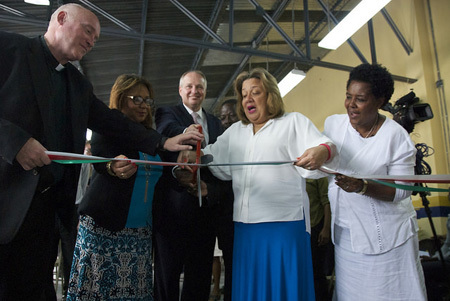 The University of Notre Dame Haiti Program (NDHP), in partnership with the Haitian Ministry of Public Health and the Population (MSPP) and the Congregation of Holy Cross, dedicated a new salt processing plant in Delmas, Haiti on Dec. 8, 2014. The Delmas facility is located in the Port-au-Prince metropolitan area.

The dedication ceremony attracted about 100 attendees, who traveled from across Haiti and the United States to attend the special occasion. Several administrators from the Notre Dame Haiti Program, Cargill Salt, and other partners of the NDHP Salt Project were present at the dedication. There was also a strong media presence at the event.  Madame Sophia Martelly, first lady of Haiti, also participated in the ribbon cutting.

The new facility will supplement an existing facility at Cite Militaire, a short distance away, and will be used to expand the production of clean, iodized salt for the Haitian population. This equipment, including the nation’s first brine-wash facility, was delivered in late December and will be fully operational in early 2015. It will allow local Haitian salt to be cleaned to food-grade quality prior to being fortified and packaged for distribution and sale. The plant will employ around 40 people when operating at full capacity in roles related to all phases of the salt operation, including processing, fortifying, and packaging.

Notre Dame worked closely with Cargill Salt on the creation of the new plant. Cargill Salt is a business unit of Cargill, Inc, an international company headquartered in Minneapolis, Minn., that provides food, agriculture, financial, and industrial products and services in 67 countries. Cargill talent was instrumental throughout the two-year project in designing the facility, managing the implementation of the plant, and providing technical services.

“On a broad scope, the facility is a critical milestone in the effort to eliminate Lymphatic Filariasis and iodine deficiency disorders in Haiti through fortified salt,” said Jim Reimer, NDHP salt project director. “The facility means cleaner salt for consumers, a new market outlet for salt producers, new infrastructure for the country, encouragement for donors, and new employment opportunities for the local workforce.” 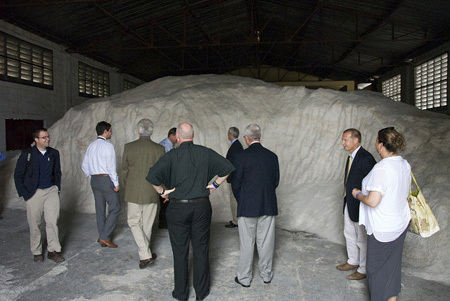 After almost a decade of work, the NDHP’s salt initiative is on the verge of making a major impact on the Haitian people. The primary mission of the salt initiative is to reduce the burden of preventable disease on the people of Haiti. The project’s goal is to stop the transmission of Lymphatic Filariasis (LF) and achieve universal salt iodization in Haiti by 2020 – a goal fervently pursued by the program’s founder and principal investigator, Rev. Thomas Streit, C.S.C., for many years.

LF is a parasitic disease that flourishes in the tropical climate of Haiti, where the effects of poverty produce areas for mosquitoes to breed and spread the disease. In existence for millennia, LF has been listed as the second leading cause of disability in the world, with over 120 million people already infected, and approximately 1.3 billion people at risk of contracting the disease. At the outset of elimination efforts, it is estimated that more than 1,000,000 persons in Haiti were infected with LF. With a concentrated effort to eliminate LF in Haiti, Notre Dame and its government, corporate, foundational, and individual partners are steadily moving toward the creation of a model for worldwide elimination of the dreaded and disfiguring disease.

"It was a truly extraordinary experience," said Joya Helmuth, outreach associate for the Notre Dame Initiative for Global Development, who traveled to Haiti for the occasion. "Haiti's need is so great in so many different areas. For the Notre Dame to be dedicated to LF for so many years, and to see real progress being made, was inspiring."

In thanking the ceremony’s attendees, and in particular, the initiative’s benefactors and supporters within the Haitian government, NDHP Managing Director Earl Carter summarized, “On behalf of a grateful University, which was founded over 170 years ago on the principles of faith and service, and which remains acutely aware of its privileged responsibility to place itself in service to the Church, through research, service, and cooperation in common projects, thank you for your cooperation and partnership as we seek to serve God’s people here in Haiti.”