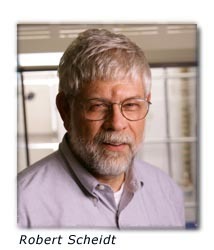 Robert Scheidt, the William K. Warren Foundation Chair in Science and professor of chemistry and biochemistry, has accepted an invitation to serve as a member of the Macromolecular Structure and Function A Study Section of the Department of Health and Human Services beginning July 1, 2010 and continuing through June 2014.

Scheidt was chosen on the basis of his achievement in his discipline as evidenced by the quality of research accomplishments, publications in scientific journals and other significant scientific activities, achievements and honors. In 2008, he received the Hans Fischer Career Award in Porphyrin Chemistry, a lifetime achievement award, at the Fifth International Conference on Porphyrins and Phthalocyanines in Moscow. He is also an elected fellow of the American Association for the Advancement of Science.

The Department of Health and Human Services division of the National Institutes of Health, emphasized the importance of Scheidt’s participation in assuring the quality of the NIH peer review process.