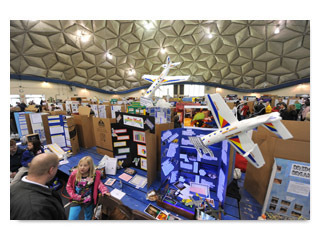 When fifth grader Lucas Vervynckt of St. Michael’s Elementary heard that Coca-Cola would dissolve a nail, he had to try it. The nail survived, but Lucas decided to try calf’s teeth available on his family farm. The experiment – seven cups of different soda brands and one of water – revealed the corrosive effects of the sweet drinks, with one reducing the tooth mass by one-third. “It was fun doing the experiment,” Lucas said. “I learned a lot of new things. I wanted to help people make better choices about pop.”

Lucas was among some 275 students in grades three through 12 who exhibited in the Northern Indiana Regional Science and Engineering Fair on March 21 at the University of Notre Dame’s Stepan Center. Older students showcased sophisticated projects, such as Marian High School senior Elise Debuysser’s research with a Notre Dame professor on controlling invasive aquatic plants. Younger students displayed their application of the scientific method to their own questions, such as “Using Protease Enzymes to Dissolve Trichobezoars,” which was fifth grader Abigail Erickson’s investigation after one of her long-haired rabbits died from a hairball.

Students came from more than 50 public and private schools in St. Joseph, Elkhart, Fulton and Marshall counties. Award winners for the top two projects in grades nine through 12 are eligible to compete in the Intel International Science and Engineering Fair in Reno, Nev., in May. Some other winners from grades four through 12 may compete at the Hoosier Science and Engineering Fair on April 4 in Indianapolis.

“My goal in everything I do is to find out how the world works. That’s what science is all about,” said Penn High School senior Dmitri Gekhtman, whose project, “A Genetic Algorithm Applied to Quark Flavor Mixing,” originated when he was working at Notre Dame QuarkNet to complete a parameterization for quarks developed by Daniel Karmgard, research assistant professor of physics. “Physics is the fundamental science. All other sciences, from chemistry up to sociology are physics on another level. You could explain them all with physics,” said Gekhtman, who expects to study physics at Cal Tech next year.

Marian High School senior Colin Leader used a semiconductor detector at Jordan Hall to measure lead levels in 20 toy cars form China and 10 from the United States. He discovered lead paint in two Chinese cars and lead embedded in some plastic parts in another. Colin took 2nd place in the regional competition of the National Science and Humanities Symposium and will participate in the national finals in Colorado in late April. “I’ll probably continue on with physics,” Leader said. “Maybe science and business.”

Adams High School junior Freida Fein would like to combine science and history after her research on animal diets at a Pokagon Village site from around 1830 that had been excavated by Notre Dame archeology students. Fein, trying to determine whether the Native Americans were adopting European practices of animal domestication and farming, used Notre Dame’s mass spectrometer to determine the ratios of carbon-12 to carbon-13 and nitrogen-4 to nitrogen-15 in the animal remains. “It looks like they were domesticating animals,” she said, explaining that the remains had similar protein values and showed that their diet included a high volume of corn.

Fifth grade classmates Paulina Alvarado and Andrea Torres from West Goshen Elementary worked together on a seismograph project, a machine that traces lines on a moving roll of paper and showed great shakes when carried up the stairs but a smooth ride in the elevator. “We always wanted to grow up and warn everybody that an earthquake is coming, so they could be prepared,” Andrea said. “I want to be a scientist when I grow up – since I was 5. I want to mix chemicals together.” Attending the fair for the first time strengthened their interest in science.