Several graduating seniors were honored on Friday, May 19, 2017, during a luncheon in the galleria of the Jordan Hall of Science for their varied accomplishments and successes. 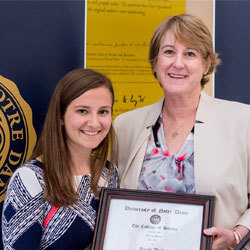 Alexis Doyle received the Dean’s Award. Presented to an outstanding graduating senior in the College of Science, this award recognizes a student who exhibits exemplary personal character, leadership, service, and outstanding achievement. Doyle majored in biology with a supplementary major in international peace studies. She also minored in the Hesburgh Program in Public Service. She engaged in an undergraduate research project to design low- and no-cost interventions to promote increased selection and consumption of fruits and vegetables in elementary school cafeterias. In 2014 she volunteered at the Primeros Pasos Clinic in Guatemala, which resulted in the founding of The Soap Project. This initiative, in partnership with mothers of the Palajunoj Valley, assessed ways to prevent parasitic infection and resulted in a self-sustaining soap cooperative. Alexis will study at the University of Oxford as part of the United States Rhodes Scholars Class of 2017, and then will attend medical school at the Icahn School of Medicine at Mount Sinai in New York. 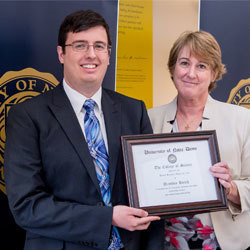 Brandon Roach received the Dean’s Research Award. This award is given to an outstanding graduating senior in the College of Science who has conducted exceptional research and who embraces, facilitates, and fosters an environment of scientific inquiry. Roach majored in physics, with concentrations in advanced physics and in astrophysics, and completed the honors physics track. He participated in the Cyclotron Institute REU at Texas A&M during the summer of 2015, and spent the spring of 2016 at The European Organization for Nuclear Research (CERN). He also completed undergraduate research in experimental nuclear physics under the direction of Anna Maria Simon, assistant professor of experimental nuclear physics. He was elected to the Phi Beta Kappa and Sigma Pi Sigma honors societies and was a finalist for valedictorian. Roach will attend Massachusetts Institute of Technology in the fall, with plans to study particle astrophysics.

In addition to the Dean’s Awards, each department within the College of Science presented departmental awards to graduating seniors: