Six University of Notre Dame science students and four alumni have received National Science Foundation (NSF) Graduate Research Program (GRFP) Fellowships. The NSF GRFP was created to enhance the scientific and engineering workforce in the United States.  The fellowship provides three years of support for the graduate education of students who have demonstrated the potential for significant achievements in science and engineering research.  Past NSF Fellows include individuals who have made significant breakthroughs in science and engineering research, as well as some who have been honored as Nobel laureates. 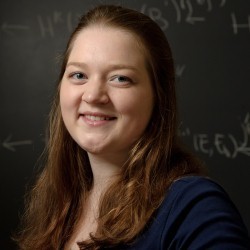 Senior MurphyKate Montee is a talented and accomplished mathematics and vocal performance double major.  She is a member of the Glynn Family Honors Program and just completed a senior thesis project titled, “On the Construction of Chern Classes of Complex Vector Bundles,” which exposes the construction of a characteristic class of complex vector bundles through algebraic topology and classifying spaces.  Her thesis was advised by Frank Connolly, professor of mathematics.

Montee is a member of the Seminar for Undergraduate Mathematics Research (SUMR), a program comprised of the most talented undergraduate mathematics students at Notre Dame. She also attended two Research Experiences for Undergraduates (REU) summer programs on knot theory at Williams College and Louisiana State University.

In addition to receiving this NSF fellowship, Montee has received several prestigious awards this year.  She was named a 2013-2014 Churchill Scholar and will pursue a Master of Advanced Studies (Part III) in Theoretical Mathematics at the University of Cambridge. She is the second Notre Dame student to receive a Churchill Scholarship. Montee was also awarded the 2013 Alice T. Schafer Mathematics Prize, which is given to only one undergraduate woman in the United States each year.   Upon her return from Cambridge, Montee will pursue a Ph.D. in mathematics and plans to become a professor. 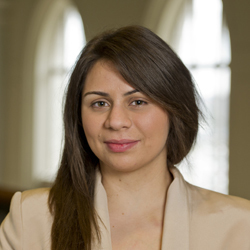 Chemistry graduate student Jennifer Arceo works in the laboratory Norman Dovichi. Her research involves the use of an ultra-sensitive capillary electrophoresis laser-induced fluorescence instrumentation for the study of glycosphingolipid metabolism within single cells. Glycosphingolipids are biologically important because of their ubiquitous role in a wide array of cellular functions, particularly in the central nervous system (CNS). Aberrant metabolism of glycolipids has been associated with disease pathologies CNS affecting diseases such as Tay-Sachs and Sandhoff disease. Arceo graduated from California Lutheran University with Bachelor of Science in Chemistry and Bachelor of Arts in Environmental Sciences in 2011. 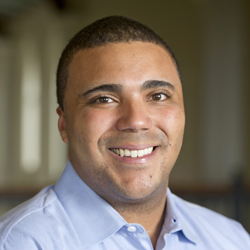 As a Ph.D. student in the Department of Biological Sciences, Eric DeLeon’s research focuses on the ability to monitor oxygen (O2) availability, whose delivery is crucial to an animal’s survival.  Vertebrates have a number of O2 “sensing” cells that monitor environmental oxygen and ensure adequate delivery to the tissues.  While there is little doubt that these cells perform important homeostatic functions, there is little consensus on how a change in O2 concentration, or partial pressure (PO2), is transduced into a physiological response, i.e., the “oxygen-sensor.”  His work focuses on the novel hypothesis that hydrogen sulfide (H2S) is the unknown key couple in the oxygen sensing process and he studies physiological responses in cells, which are measured with polarographic electrodes, and more recently intracellularly via nanoparticles. DeLeon works with Kenneth Olson, emeritus professor of cellular and integrative physiology at the Indiana School of Medicine – South Bend and adjunct professor of biological sciences at the University of Notre Dame. He earned a Bachelor of Science in Chemistry from the University of Notre Dame in 2012. 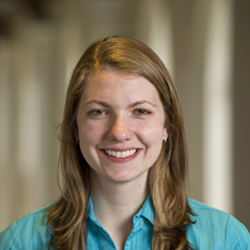 Rachel Schluttenhofer is also a Ph.D., student in the Department of Biological Sciences. Under the guidance of Patricia Champion, associate professor of biology, she is studying mycobacteria, such as M. tuberculosis, the causative agent of tuberculosis, that require the ESX-1 secretion system for virulence. The lab is interested in finding and characterizing novel genes required for secretion. Her current work is with a M. marinum transposon-insertion strain that she have found to be deficient in ESX-1 secretion.  Studying the molecular mechanisms of ESX-1 secretion will aid basic understanding of mycobacterial pathogenesis. 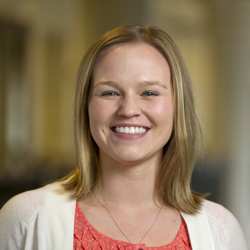 Biological sciences master’s degree student Shayna Sura studies brine shrimp (Artemia Franciscan) cysts that are harvested from Great Salt Lake, Utah and used as food in fish and shrimp hatcheries. Current harvesting techniques collect cysts floating on the lake's surface, which poses a potential selective pressure against floating cysts and could affect population dynamics. She is examining the heritability of cyst buoyancy and the influence of genetic and environmental variation. In addition, using historic harvested cyst samples, she is examining whether various cyst characteristics and brine shrimp life history traits have changed over time. Sura’s faculty advisor is Gary Belovsky, professor of biological sciences and Martin J. Gillean Director of the Environmental Research Center.  She graduated from the University of Notre Dame in 2011 with a Bachelor of Science in Environmental Sciences. 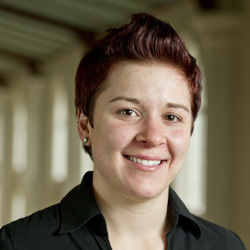 Carmella Vizza, a biological sciences Ph.D. student, is studying the effects of climate change on ecosystem processes, such as decomposition and biofilm nutrient limitation in the coastal wetlands in the Copper River Delta, Alaska.  The wetlands provide an essential habitat for fish and wildlife, including threatened migratory bird populations. Advised by Gary Lamberti, professor and chair of biological sciences, the goal of Vizza’s research is to establish a link between these processes and methane production and emissions. She graduated from Tulane University in 2008 with a major in ecology and evolutionary biology and a minor in English.

Brittany Angarola graduated from Notre Dame with a double major in biological sciences and Spanish. As an undergraduate, she worked with Zachary Schafer, Coleman Assistant Professor of Cancer Biology, researching cellular mechanisms underlying the evasion of detachment-induced cell death in inflammatory breast cancer cells. She is now pursuing a Ph.D. in cell biology at Yale University and is investigating the novel mechanisms that support lysosome homeostasis.

Jessica Pearson was a chemistry and math double major at Notre Dame.  As an undergraduate, she worked in the laboratories of Brandon Ashfield, assistant professor of chemistry and biochemistry, on organic synthesis, and Zachary Schultz, assistant professor of chemistry and biochemistry, working on developing and characterizing a substrate for surface enhanced Raman spectroscopy. Pearson is a current graduate student at the University of Illinois, Urbana-Champaign and works with an instrument called SCRIBES (Sensitive, Cooled, Resolved Ion Beam Spectroscopy) that produces high-resolution vibrational spectra of molecular ions in the gas phase under astrophysically relevant conditions.

Nicholas Mancinelli was a physics major, with a concentration in astrophysics, at Notre Dame. During his junior year, he had the opportunity to study physics abroad at Trinity College in Dublin, Ireland. He also completed a Research Experience for Undergraduates (REU) program at the University of Colorado, Boulder studying the tectonics of the Bighorn Mountains.  Mancinelli is a graduate student at the University of California, San Diego where he analyzes seismic waves from earthquakes around the globe to determine the fine-scale structure of the deep Earth. The goal of his research is to better understanding the geodynamical and geochemical processes within our planet.

Kimberly Schlesinger graduated from Notre Dame with a double major in physics and English. As an undergraduate, she worked on superconductivity research with Morten Eskilden, associate professor of physics. Schlesinger is a current Ph.D. student at the University of California, Santa Barbara researching the progress of mutating infections in the human immune system, using mathematical models of immune system cell population dynamics. She hopes to build upon her work by modeling the spread of diseases over human population networks.