Ryan Kim, a rising junior, trained for an “Olympic” event with his team on the third floor of Jordan Hall by assembling several rubber bands and attaching them to a 500-gram bag of sand, preparing it for its first bungee jump to the floor below.

The catch: To have a chance of posting a winning score, the sandbag could not plop into the bucket of water on the first floor, and must end its journey suspended at the height of a small step stool. How to accomplish this task in 25 minutes or less? Using physics, of course. 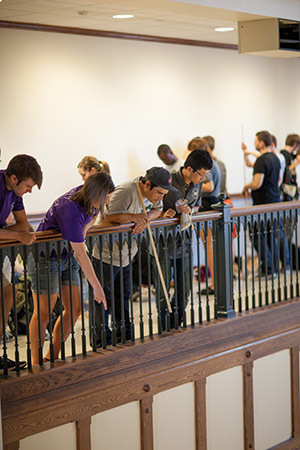 The 10th annual Physics Olympics was hosted by the Notre Dame Department of Physics and the Research Experience for Undergraduates (REU) program on Tuesday, June 13. Sixty rising juniors and seniors in the REU programs at Notre Dame, Purdue and Michigan State participated in the event, though students in those three programs represented different undergraduate institutions from all over the country. Overseeing the event were Umesh Garg, professor of experimental nuclear physics, and several Notre Dame graduate and undergraduate students.

“Three minutes left!” yelled judge Allan Leishman, a physics graduate student, as he stood on the first floor of the galleria and steered clear of the buckets of water, the occasional sandbag splashing into them. Allie Olshefke, a rising senior, served as the scorekeeper for the teams, which were given three attempts to suspend the sandbag within the target zone.

The teams of 4 rotated to another event, Faraday Pickup, in which they created electromagnets using two 1.5-volt batteries, bare wire, 2 large nails, and black electrical tape. The goal was to pick up the most paper clips from one container and deposit them into another, with the number of clips determined by weight. Luis Morales, a graduate student in physics, watched the teams as they constructed their electromagnets, and said he could immediately tell which team would win based on their technique.

The third event, Raft in Dire Straits, tasked students to create a raft in 25 minutes from a square foot of aluminum foil, 10 straws, and six rubber bands. Once students constructed the raft, they floated it in a tub of water while placing large bolts onto it. The goal was to add as many bolts as possible, while still allowing the raft to float for 10 seconds. On Tuesday the high score was 17 bolts, but 3 years ago a team was able to place 27 before the ship capsized.

The strength of the Physics Olympics rests with the power of collaboration, according to Leishman. Students are paired with others from different schools, so that each can bring their own experiences and expertise to the group. 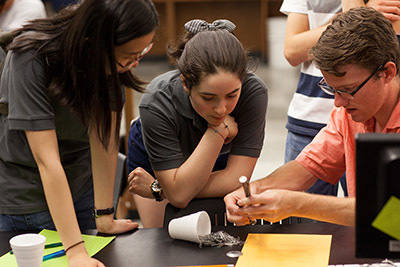 “Physics, and science in general, is a highly collaborative field, where the success of a project is not only dependent on having great ideas, but also being able to effectively communicate these ideas with your co-workers,” he said. “The teams that do the best at the Olympics are always those which can best utilize each other’s strengths to work toward a common goal.”

At the end of the day, the top three teams were awarded token prizes, including water bottles and gift cards. The team of McMaken, Lepare, Saxton, and Butler were the overall victors. “I enjoy being with this bunch of bright, motivated, physics majors, and watching them come up with ingenious (though not always successful) solutions to the problems at hand,” Garg said about his favorite part of hosting the Physics Olympics. “I also like showcasing our physics program and our campus —the Purdue REUs are given my one-dollar campus tour at the end—to these most desired prospective graduate students.”

The NSF-funded Notre Dame REU program, now in its 31st year, is the longest-running, continuously funded REU program. It’s a ten-week summer program in which rising juniors and seniors work with faculty or conduct their own research, in order to get hands-on experience in science. NSF funds a large number of research opportunities for undergraduate students through its REU Sites program. An REU Site consists of a group of ten or so undergraduates who work in the research programs of the host institution. Students are associated with a specific research project, where they work closely with the faculty and other researchers. Students are granted stipends and, in many cases, assistance with housing and travel. Undergraduate students supported with NSF funds must be citizens or permanent residents of the United States or its possessions.