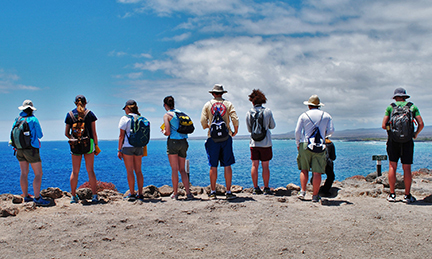 This fall break 14 students spent a week on the Galápagos Islands as part of the Practicum in Field Environmental Biology course. The course aimed to introduce and amplify the principles of evolutionary biology, ecology, and environmental science on the islands and afforded students the opportunity to refine their understanding of the scientific method, especially formulating hypotheses from observations and collecting data to test those hypotheses. 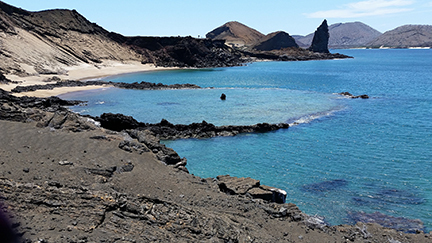 The Galápagos Islands are an archipelago of 19 volcanic islands, many smaller islets, and a marine reserve situated approximately 1,000 km from the South American continent. Famed for its remote location, unique ecosystem, and being the locale that influenced Charles Darwin’s theory of evolution by natural selection, the archipelago is a UNESCO World Heritage site, dubbed “a living museum and showcase of evolution.” The islands are the results of centuries of volcanic and seismic activity and each boasts its own unique landscape, with some being noted for their white beaches and others for their black volcanic rock. Given their location at the confluence of three ocean currents the collection of islands is a melting pot of marine species, and due to the remoteness and isolation of the islands many species that call this fragile ecosystem home are endemic to the area. 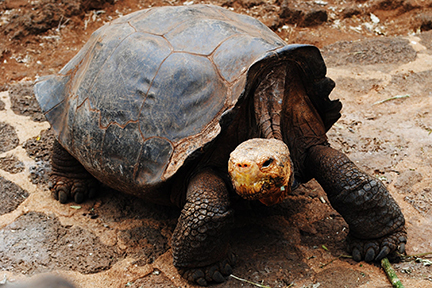 Prior to the trip, students attended classes on campus in which they learned background information about the discovery and scientific exploration of the Galápagos Islands, and information pertinent to understanding the unique features of the archipelago as they influenced evolutionary and ecological theory. During the trip, they explored the unique oceanographic setting and executed their individual observational projects. They were based on the island of Santa Cruz and travelled by boat to other islands, where they spent their mornings climbing ancient volcanoes and their afternoons snorkeling in the Pacific Ocean to observe the natural flora and fauna and collect data. They visited multiple scientifically significant sites, including the Charles Darwin Research Station, where they had on-site lectures and activities covering the historical, geological, and biological features of the islands.

Sophia Chau, a senior, conducted a project comparing the diversity of introduced species of plants to native species on different islands, relative to the age of each island, its climate zone, and its population. She gleaned from her observations that there were fewer introduced plant species on the islands with drier climates, and concluded that introduced plant species were less hardy than native species and therefore were unable to thrive in the drier climate zones. Chau said the highlight of the trip for her was “traveling to different islands and seeing first hand how various conditions affected the evolution of the same plants and animals.” She reflected that it was “heartening” to see the conservation efforts on the islands and witness nature thriving even in the presence of humans.

Sarah Cate Baker, a junior, wrote about her experience in The Observer, and echoed Chau’s thoughts: “What blew my mind minute by minute,” she said, “was the way that the humans and the wildlife worked together.” She added, “I saw there what the world looks like when we take the time to understand the life around us and make the effort to help it live.”

Anna Chang, also a junior and an intern with the Notre Dame Environmental Change Initiative (ECI), carried out a project observing the differences between cacti on certain islands, noting how they may have evolved relative to threats from different predators on each island. Writing for ECI she said, “Snorkeling in the chilling waters surrounding the islands provided many of my favorite memories. During our first time out snorkeling, I was suddenly surprised by a green sea turtle staring me in the face as it rose to the surface!” 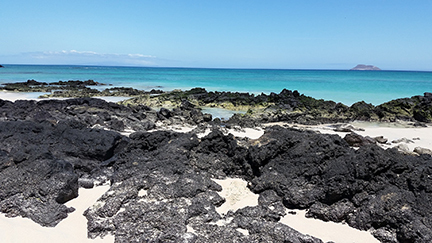 Ecologist and environmental scientist, Gary Lamberti, and molecular geneticist, Mac Fraser, directed the course. Lamberti commented, "We were thrilled to be able to lead science students to the cradle of evolutionary theory in the Galápagos Islands.  The ability to experience first-hand the wonders of biology in such a unique place gave everyone in the class a rich appreciation of the amazement that Charles Darwin himself must have felt nearly two centuries ago.” Fraser added, “The students were fully engaged and obviously excited to finally use the knowledge they had gained in class during our week on the islands. They developed a wonderful camaraderie both between themselves and with the professors. As an educator, I can say that this has personally been one of the most rewarding teaching experiences in my 33 years here at Notre Dame.” 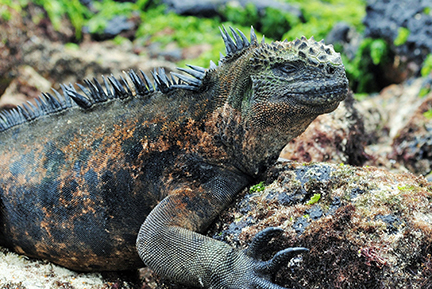