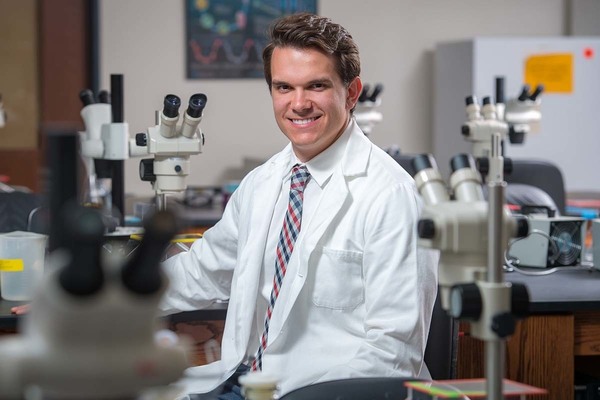 Every year, the University of Florida hosts the Pediatric Research Forum for Medical Students, an annual gathering for medical students to present important research developments and network with professionals as they prepare to apply to residencies. This year, Samuel Rudisill won a first place award for his research on infant anesthesia and sedation. Remarkably, Rudisill is not a medical student, but a senior at the University of Notre Dame.

During the summer of 2017, Rudisill conducted research for 10 weeks at the Boston Children’s Hospital and Harvard Medical School, which he believed yielded meaningful results demanding more investigation. “Although the effects of anesthesia and prolonged sedation have been studied in the adult brain, the effects on infant brain development have yet to be characterized,” Rudisill said. “We evaluated a novel software designed specifically to address the difficulties of neonatal brain tissue classification via MRI analysis and applied it to test our hypothesis that exposure to anesthesia and prolonged sedation would lead to attenuation of brain growth.” At the conclusion of his research, Rudisill discovered a correlation between anesthesia exposure and brain growth. Rudisell also found that infants exposed to anesthesia and prolonged sedation also had decreased total brain volume.

While Rudisill, a native of Woodbury, Minn., was  anxious about being the only undergraduate at the conference, he found the experience to be a positive one overall. “I was aware that I would be the only undergraduate at the conference, so I had a little time to mentally prepare. Although I was somewhat intimidated by this, I forced myself to view it as an opportunity to prove myself at the next level,” Rudisill said. “My fellow presenters were very friendly and inclusive, and I am happy to say that I made several new friends in my time in Orlando.”

Despite winning first place while competing against medical students, Rudisill found the overdue recognition for the issue of infant anesthesia to be the most gratifying part of his work. “These babies, all less than 12 months old, comprise one of the most vulnerable patient populations. Exposure to anesthesia and prolonged sedation is routine, so finding detrimental effects surely raises some worries.”

Overall, Rudisill found the research project to be challenging but also a growth experience. “I dove into a major research project, had to learn new software, and was expected to generate tangible results for upcoming publication in only 10 weeks, all while becoming acquainted with a new city,” he said. “In all of my years of schooling and research, never have I been so strenuously challenged, but this proved to be the most rewarding aspect.”

Looking ahead, Rudisill, a neuroscience and behavior major, intends to pursue a gap year after graduation with the hopes of returning to Boston to conduct more research, potentially in a different specialty . Rudisill is looking forward to medical school to become a surgeon, but he is still keeping his options open. “In the short term, I have found this experience to be extremely motivating. It has served to reinforce my hard work and dedication to my studies, as well as to further excite me about my intended career path,” Rudisell said. “In the long term, I hope this project will continue towards publication and generate conversation in the medical community.”