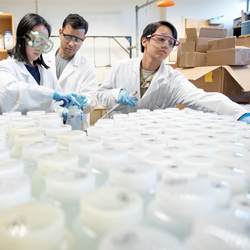 The Flint, Mich., water crisis made headlines across the country last year. Social media campaigns and crowdfunding sites urging people to donate to relief efforts to help get clean water for the citizens, while definitely useful in illustrating the severity of the problem, do not tell the whole story. Kelsey Pieper and Siddhartha Roy, two of the 30 members of the research team that helped uncover the catastrophe that is the Flint water crisis, recently gave a presentation at Jordan Hall telling the complete story of the crisis.

The problem with the water in Flint is that it is contaminated with lead. As Pieper pointed out, lead installation in the US is “a long running environmental and public health catastrophe.” Lead is used in the infrastructure of  our plumbing and is continued to be used despite its negative health effects. In an attempt to combat the presence of lead in pipes, government agencies, like the Detroit Water and Sewer Authorities (DSWA), add corrosive chemicals into the water to weigh down the lead so it could not float in the water. However, finances come into play due to the expense of treating the water. Because the water treatment became expensive to maintain, the DWSA decided in April 2014, to stop treatment in order to find a cheaper alternative. However, the ramifications of this decision were extremely detrimental.

The subject of the presentation began to focus on Lee-Anne Walters, the first Flint resident to make complaints about her water. Her children showed signs of developmental issues and were diagnosed with having lead poisoning. Walters then sent complaints to the Environmental Protection Agency (EPA), but received no assistance. Eventually, the Virginia Tech research team, led by Professor Marc Edwards, stepped in to help. Initial tests of Walters’s water showed increasing levels of lead in her water supply. The EPA recommends that water should have no more than 15 parts per billion (ppb) in order to be considered safe to use. In February of 2015 the concentration of lead in her water was 104 ppb, 397 ppb in March, and 707 ppb in April. The highest concentration of lead tested in Flint water was a staggering 13,000 ppb. With these kinds of numbers and considering the fact that at least 50% of Flint homes had lead pipes in their infrastructure, the impact of lead contaminated water on the community was absolutely catastrophic.

The lack of treatment also allowed for the growth of harmful bacteria in the water supply. This was especially damaging to hospitals and large buildings. As a result, cases of Legionnaire’s disease outbreaks were abnormally popping up. Some 90 citizens were diagnosed with the disease in 2015 and of those 90, 12 died from their exposure to it. All in all, of the approximately 100,000 residents of Flint, there were at least 200 confirmed cases of lead poisoning within the first 18 months of the lead exposure. However, these are only confirmed cases. Considering the extent to which houses had lead pipes and using Lee-Anne Walters case as an example, many more residents could have sustained lead poisoning, but are not aware of it.

Thanks to the Virginia Tech research team bringing these facts to light, over $600 million in relief funds have been raised from social media campaigns and crowdfunding sources. This money is going toward helping make the residents’ water cleaner by allowing accessibility to water filters at low prices. The research done by the Virginia Tech team also provided the evidence which would lay the groundwork for at least 450 lawsuits against the Flint governmental agencies involved in the disaster. Roy concluded the presentation saying that he hopes the Flint case illustrates the “pervasiveness of lead in our infrastructure, the weak rules set in place to protect our water,” and called for those who are supposed to have an interest in the health of the general public to “not cut corners and cheat in order to meet regulation standards.” Only time will tell if we will learn from these mistakes or set ourselves up for an even greater disaster.