Water is so integral to life that the molecule is even necessary to keep DNA—the genetic code that determines the characteristics of all living things—hydrated. Scientists knew water closely surrounded the DNA helix, but until now hadn’t definitively observed the “spine” of water molecules just at its surface with optical spectroscopy. 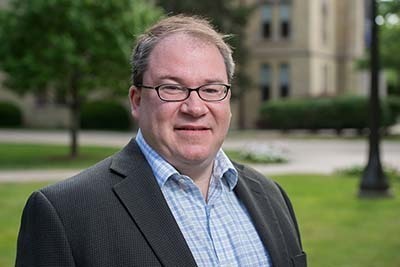 Scientists have been aware since Watson and Crick first reported the double helix structure of DNA in 1953 that water had an important relationship with the biomolecule. But finally observing the spectroscopic signature of the column of water is a breakthrough with implications for cancer drugs and other biomedical research.The discovery, “DNA’s Chiral Spine of Hydration,” was published May 24 in the American Chemical Society journal Central Science.

Poul Petersen, of Cornell University, used chiral sum frequency generation spectroscopy (SFG) to observe the collection of water molecules, and Corcelli’s lab created the simulations that aided in interpreting the results. Steven Corcelli, professor in the Department of Chemistry and Biochemistry, was among a group of researchers who observed this chiral column of water molecules along the minor groove in a DNA molecule—the place where the backbones of the DNA spiral are close together. DNA is chiral, which means it is asymmetric (it’s actually right-handed) and it can’t be superimposed on its mirror image. The researchers discovered the water column at the surface followed the same structure.

“Certain drugs need to bind to the DNA, and the water needs to re-orient itself to move out of the way,” Corcelli said. “Now we will be able to better understand the role of water when small molecules bind to DNA.”

SFG is a method in which two photon beams, one visible and infrared, are aimed along different lines at the sample. Their interaction creates a beam that is the sum of the two beams’ frequencies. Manipulation of the beams by Petersen’s lab, along with various calculations and simulations by Corcelli’s lab, proved the existence of the chiral water structure.

Next steps for the research include time-dependent versions of the experiment that will provide new insights about the motion of water in the grooves of DNA, as well as observing other chiral structures composed of several molecules.

“I’m particularly excited that this technique will allow us to study the detailed structure and dynamics of water in the minor groove,” Corcelli said. “This will give us a fresh understanding of the role of water in the biophysics of DNA.”