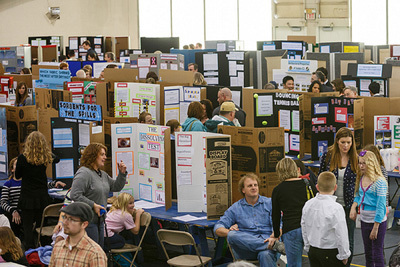 From diaper absorbency to the detection of dark matter, student projects addressed a number of life’s mysteries last Saturday at the Northern Indiana Regional Science and Engineering Fair (NIRSEF).

Held in the Stepan Center at the University of Notre Dame, this year’s fair featured 230 projects from area students in grades three through 12.  The students were chosen to participate at NIRSEF after winning in local and school science fairs, or based on teacher selection.

Students in the fair’s elementary/junior division presented on mostly at-home science experiments, such as the efficiency of dryer lint as a medium for oil spill clean-up, and an absorbency comparison of premium brand versus generic diapers.

Many students in the senior division used their projects as an opportunity to collaborate with researchers at Notre Dame and other local colleges and universities.  The equipment and guidance provided by these researchers allowed the students to explore more advanced science topics, like the use of acoustic sensors to detect dark matter and the development of cheaper, more effective means to gauge pollution levels in streams.

The judges at NIRSEF – graduate students and professors at Notre Dame, as well as area science teachers and professors from local colleges and universities – awarded projects within the category of competition.  Later, additional prizes were awarded by independent organizations, such as the Michiana Astronomical Society and the American Society of Quality.

“The dedication of participants and their families is integral to the Fair’s success as judges, volunteers, and the general public are afforded the opportunity to witness the talents of future engineers and scientists,” Zornig says.