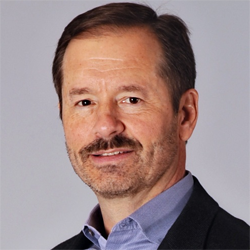 On Monday, February 24 at 4:00 p.m. in 101 Jordan Hall of Science, Lewis Cantley, the Margaret and Herman Sokol Professor and Director of the Cancer Center at Weill Cornell Medical College/New York Presbyterian Hospital, will give a lecture called, "Targeting PI3K for Cancer Treatment."

Cantley obtained a Ph.D. in biophysical chemistry from Cornell University in 1975. Prior to taking the position at Weill Cornell, he taught and did research in biochemistry, physiology and cancer biology in Boston at Beth Israel Deaconess Medical Center and Harvard Medical School. His laboratory discovered the PI 3-Kinase pathway that plays a critical role in insulin signaling and in cancers.

Cantley was elected to the American Academy of Arts and Sciences in 1999 and to the National Academy of Sciences in 2001. Among his other awards are the ASBMB Avanti Award for Lipid Research in 1998, the Heinrich Weiland Preis for Lipid Research in 2000, the Caledonian Prize from the Royal Society of Edinburgh in 2002, the 2005 Pezcoller Foundation–AACR International Award for Cancer Research, the 2009 Rolf Luft Award for Diabetes and Endocrinology Research from the Karolinska Institute, Stockholm, the 2011 Pasrow Prize for Cancer Research and the 2013 Breakthrough in Life Sciences Prize.

This event is sponsored by the Nieuwland Lecture Series.