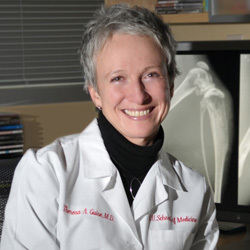 Theresa A. Guise, M.D., is Professor of Medicine and Jerry W. and Peg S. Throgmartin Professor of Oncology in the Department of Medicine, Division of Endocrinology at Indiana University School of Medicine.  Her research interests include the effect of cancer and cancer treatment on the musculoskeletal system and have been funded by the NIH, Department of Defense, Susan G. Komen Foundation, Prostate Cancer Foundation, V-Foundation, Mary K. Ash Foundation and the Indiana Economic Development Corporation.

She received the Fuller Albright award of the American Society for Bone and Mineral Research in 1999, was elected to the American Society for Clinical Investigation (ASCI) in 2004 and the Association of American Physicians in 2008. She was Secretary-Treasurer and Councilor of the ASCI (2006-2010) and permanent member of NIH study section for Skeletal Biology and Skeletal Regeneration (2004-2009; Chair 2008, 2009). She is currently Vice President and President-elect of the IBMS, Scholar of the Susan Komen Scientific Advisory Council and Chair of the Board of the Paget Foundation and Bone and Cancer Foundation.

This lecture is sponsored by the Johnson & Johnson Lecture Series and the Department of Biological Sciences.