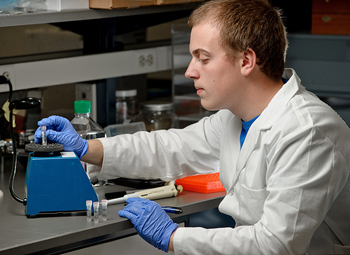 Scientia, the Undergraduate Journal of Scientific Research, hosts a monthly seminar series entitled, Talk Science.  One of the goals of Talk Science is to build camaraderie amongst science undergraduate students and faculty in an informal and fun environment. Junior biological sciences major Andrew Mancini and Peter Garnavich, professor of physics, both gave presentations on their research at the most recent seminar on Thursday, March 21.

Andrew currently works in the laboratory of Matthew Ravosa, professor of biological sciences. His research focuses on the effect of cortisol on cartilage formation and breakdown. Cortisol is produced by the adrenal gland in response to stress and an increase of adipose tissue. By analyzing levels of chondrocytes (chondroblasts caught in the collagen fibers of the extracellular matrix that produce cartilage), Andrew was able to assess the effect of cortisol on cartilage breakdown. He concluded that there was a direct correlation between increased cartilage deterioration and long-term exposure to cortisol. Andrew hopes to extend his research by studying the relationship between cartilage breakdown, weight induced strain, and cortisol effects in overweight people, as well as finding treatments to prevent cartilage breakdown. 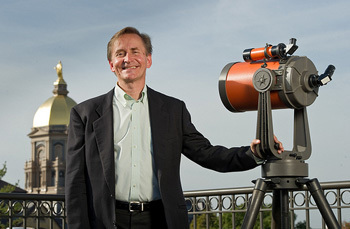 Prof. Garnavich was a member of the High-Z Supernova Team, one of the two teams that received a Nobel Prize in 2011 for discovering that the universe is accelerating in its expansion.  Using Type Ia supernovae (SN Ia) as standard candles, which are astrophysical objects that have a known luminosity due to a certain characteristic found in the entire class of objects, the group was able to compute the absolute magnitudes and distances of the novae. Based on these distance values and the emitted and observed wavelengths, the redshift values, z, were computed. The team discovered that supernova luminosity distances indicated an accelerating universe. Prof. Garnavich also elaborated on the resulting support for the existence of dark energy and thus, an updated value of the universe’s matter density.

Recently, the European Space Agency’s Planck satellite completed a heat map of the universe that revealed the dominant presence of dark energy as well as many exciting anomalies. The map also shows microwaves dating back to the 370,000 years following the Big Bang. Prof. Garnavich emphasized how important the map will be in revealing the origins of the universe and how it has grown over time. The current estimates for mass percentages include 4.9% ordinary matter, 27% dark matter, and 68% dark energy.

In addition to research talks over pizza, Talk Science serves as a forum for undergraduates to keep up with College of Science events. Students are highly encouraged to submit abstracts for the next College of Science Joint Annual Meeting (COS-JAM) on May 3. The abstract deadline has been extended to March 29.

Although Scientia is no longer accepting submissions for the next issue of the journal, please contact the editors, Rachel Cotton and Rebecca Marton if you are interested in becoming involved in the journal for next year.